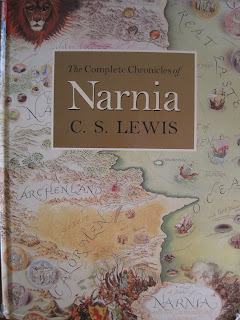 Comparing Oliver Twist to The Horse and His Boy may seem far-fetched, but the stories are more similar than you might think.
First we have Oliver and Shasta (unlike Aravis, I prefer to keep calling him this name instead of Cor.) They both have an innocent quality. Oliver's is more because he's a little younger and it's central to the story that he's the innocent victim. Shasta's is less because C.S. Lewis never leaves accountability out of his stories. For Shasta to be accountable for his actions, he can't be entirely innocent. In him, it's more just an air of innocence, coupled with a lot of ignorance. Oliver also has some ignorance, though, as he falls into his den of thieves, as compared with Shasta's Calormen. They're both on a quest to get away from this griminess to where they originated, with the London elite and with the Narnians.
Now on to Bree and . . . Mr. Jack Dawkins, the Artful Dodger. That's a funny image; I don't think either one would like it very much. The reason for both statements? They both have such an ego. They both think so much of themselves. Of course, in Bree's case, his ego handicaps him, while the Artful nearly always keeps his head because of his confidence. Their relationship to Oliver/Shasta is similar, as well. The Dodger teaches Oliver to pick pockets and Bree teaches Shasta to "raid" the Calormenes during their journey. Sure, it seems like Bree is justified in this (what else could they do?), but then we come back to accountability. They were stealing, justified or no.
The female characters are a little harder. I've settled on Nancy and Aravis, and Rose Maylie and Hwin. The first two have spirit and manage to see right and wrong even in difficult situations. Rose and Hwin are both sweet, gentle, and kind.
And there it is. I could try to go on by saying that Rabadash and Bill Sykes both were willing to kill and loved one of the female characters or that Arsheesh is greedy like Fagin, but I think my comparisons will start to run dry if I go so far.
Posted by Deanna Skaggs at 9:27 AM No comments:

I was over at Tempe Marketplace last night and looked up to see a plane getting ready to land. A common sight since Sky Harbor airport is right there; it's more uncommon to look up and not see a plane. But then we started wondering if it was the Air Force One. After all, Obama was supposed to be at the Grand Canyon tomorrow (now today.)
I happened to have my phone in my purse, so I was able to get a couple of shots with it (versus lower-quality phone pictures.) They're still not the best, but I had to hurry before the plane went out of view. The first one is cropped so you can actually see the flag, and the second is further away to show where it is. 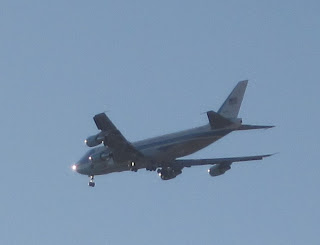 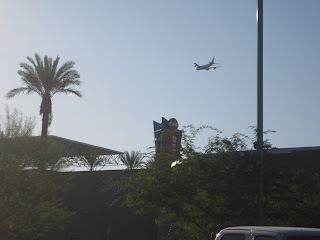 When I got home, I read that the President and his family were staying in Phoenix for the night, and this morning I found another short article about the trip.
This week (including the weekend) has been busy, what with my Narnia reading and a few things I needed to organize, but I have a couple of topics I'd like to post about when I have the time. Hopefully tomorrow.
Posted by Deanna Skaggs at 11:56 AM No comments:

I felt like reading something simple right now, and as I don't seem to have much in that way that I haven't read yet, I opted for a quick reread of The Chronicles of Narnia. It's always nice to get all the things I've forgotten for another time while revisiting favorites. With Narnia, there's plenty that you might not notice until reading it a few times and other things that you never tire of reading. Simple, but still encouraging mind activity.
There are so many books I haven't read that I've been busy enough lately trying to get to them, but I do miss the days when I didn't feel like I wasn't making any progress by picking up an old favorite. I don't like forgetting things, books included. There's just never enough TIME.
Which is why I'm in a race to finish all seven Chronicles on Friday. That's one a day. I'm on The Horse and His Boy right now, going in chronological order. This time around, I'm finding Shasta very much an Oliver Twist character, with Arsheesh as Fagin and Bree could be . . . but that could be another whole post.
Posted by Deanna Skaggs at 5:49 PM No comments:

The Woman in White 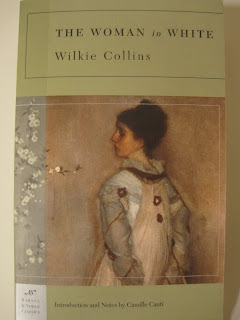 I'd been wanting to read this for a while, after coming across Andrew Lloyd Webber's musical version of the book. Not that I ever got to see the musical, I just watched some clips and fell in love with the song "I Believe My Heart." (You can see the musical version of it here and the one by Keedie and Duncan James here. I'd love to have Josh Groban and Hayley Westenra sing it together . . .)
The Woman and White and author Wilkie Collins never seem to be in the forefront of the classics, and I really wondered why as the first parts of this book completely enraptured me. There's something tender and innocent about it, which is captured quite nicely in "I Believe My Heart." But then the emotional pull started to get tiring. The middle of the book was draining to read. Then what follows, while interesting, is driven by figuring out the facts of a mystery. Mystery isn't exactly my genre. I get a little bored if it lasts too long. And The Woman in White is a long mystery at 620 pages.
Here's my brief comment on those 620 pages: this book definitely has its moments and I'd recommend it as a good read, but the plot-driven state seems to leave it a little bare in other areas, so I can't make it a great favorite.
Posted by Deanna Skaggs at 12:45 PM No comments:

Word of the Week 5: Kitchen

Kitchen (n) - 1. a room or place equipped for cooking. 2. culinary department; cuisine.
I've been spending a lot of time in the kitchen this week, so I chose it for my word this time out of the others that came to mind: food, eating, table. Kitchen's a more flexible term, because has a similar joy/happiness duality to it. Technically, a dining room and a kitchen are separate things. And if there's a table in the kitchen, it's a "breakfast nook." The word "kitchen" is of a coarse sort, implying the out-of-the-way room where servants work in old books (there's my connection to books for this post!), but if the table and chairs are in it, it usually becomes a more homey place.
For one, the table gets used for more than just eating. If you have a formal dining room, chances are this won't be the case. I've been sitting in the little kitchen of my new abode, reading, going through papers, on the computer. It can be a handy thing because it lets me keep an eye on anything that's on the stove. The cooking is still there, just added to.
So I propose we come up with a new room for multi-functional kitchens. If we have bedroom and bathroom, why not call it stoveroom? It just mentions something in the room, not a limit. But it's still not quite right . . . . I guess I'll leave "kitchen" be.
Posted by Deanna Skaggs at 2:59 PM No comments: