Kaleb Nation, of twilightguy.com fame and author of the Bran Hambric series, is at it again. This time, he is reading Shiver by Maggie Stiefvatar and in place of the blog posts he did for Twilight, there will be vlogs. Now, I have come to enjoy Kaleb's vlogs in the same way I enjoyed twilightguy.com, so I'd like to watch these vlogs. And I've always thought it would be intriguing to read twilightguy.com while simultaneously reading Twilight (except that it would almost be like reading spoilers since Kaleb is so perceptive to what's going on) . . . so I have decided to read Shiver along with shiverguy.com. In addition to this, I downloaded Barnes and Noble's digital version -- I'm also experiencing their eReader. I've only used the Mac version as of now; I may try out the iPhone app later on just to see what it's like, but no promises.
The first vlog is up already, and my, does this promise to be a reading experience like no other.
Posted by Deanna Skaggs at 4:49 PM No comments:

Word of the Week 8: Inveigle

Inveigle (vb) - 1. to entice, lure, or ensnare by flattery or artful talk or inducements (usually fol. by into): to inveigle a person into playing bridge 2. to acquire, win, or obtain by beguiling talk or methods (usually fol. by from or away): to inveigle a theater pass from a person (dictionary.com)
I came across this strange word in Great Expectations last week. Wemmick, in describing to Pip the respect/fear the masses have for Mr. Jaggers, says of the latter's watch, "Mr. Pip, there are about seven hundred thieves in this town who know all about that watch; there's not a man, woman, or child among them, who wouldn't identify the smallest link in that chain, and drop it as if it was a red-hot, if inveigled into touching it." - Charles Dickens
Such an odd sound this word has, hence my extra notice of it as I was reading. It has a familiar tone to conniving; perhaps it's the "v?" The "v" does have a sinisterness to it, as in "villain" and "vain" and "vermin." Its pronunciation has a combination of subtle breath and forcefulness. Ah, words!
Posted by Deanna Skaggs at 4:34 PM No comments: 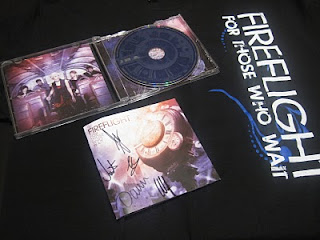 Yesterday, a loud banging came on my screen door. Someone very angry and mad must have been there, it seemed. A vicious and loud robber, perhaps. But, no, that's just how the FedEx man knocks -- to make sure he is heard, I suppose. The vicious cacophony I forgive, though, as soon as I get my package. Yesterday it was my signed copy of Fireflight's new album, For Those Who Wait (have to love that name), along with a t-shirt. Completely wonderful. I'll share my thoughts later when I've had a chance to listen to the CD more.
Also yesterday, The Hillywood Show released some behind-the-scenes footage for their Dark Knight video. Take a look here. While their behind-the-scenes always show how much they genuinely like what they do, this one also shows the hard work that goes into every video. Hilly and Hannah have said that Dark Knight was the hardest thing they've done, and I can see why. Professional quality? The Hillywood Show is professional.
Right now, I'm finishing up Elizabeth Gaskell's Ruth for a class (ENG 329: 19th Century British Novels, to be exact). A little base, shall we say, towards the beginning, but not a bad read. I may very well choose it for my paper. Ms. Gaskell does get points for being Charlotte Bronte's friend, in any case.
Posted by Deanna Skaggs at 8:58 PM No comments: