The flower and the Cactus 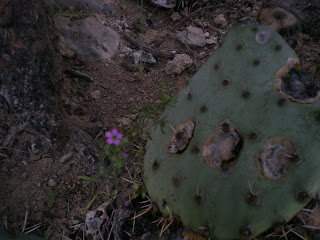 To apologize for not having a picture before, I'm posting this one today that has absolutely nothing to do with what I'm talking about. Wait. . . what am I talking about?
Let's try a new strategy: connecting this picture to some book or other.
The flower doesn't have the best focus here (I know, I'm not a great photographer), but I love its contrast against the cactus pad. They contrast in looks, but they're actually quite similar. The flower is pretty, but small and insignificant. The cactus pad is larger, but uglier, especially given all the holes in its flesh. So they're on pretty equal ground. Like. . . Jane and Rochester! (Somebody should probably start thinking about reading more than just Charlotte Bronte.) Of course, Jane is plain rather than pretty, but I'm thinking of who she is instead of what she looks like. She's a kind, devoted, beautiful person, though very small in the world. Rochester, well, he is kind of ugly. But besides that, he's higher up. You can see his status, his power. Cactuses are powerful things, storing all that water (like Rochester's inherited money) to live off of for so long. Then they both have their strength. His is more inherent; hers she has to work for more to survive in the desert they're in.
Well, to say "desert" figuratively, of course. I personally adore physical deserts. The weather is so beautiful now that the sun is actually warm again. That's why I just had to go on a photo shoot of all the pretty greenery, including this pair.
Posted by Deanna Skaggs at 12:51 PM