As promised, here are my thoughts on Fireflight's new album, For Those Who Wait. It took a little getting used to at first; not to say that it was completely different from their other work. This album, instead, seems to combine styles from The Healing of Harms and Unbreakable. Its very upbeat music this time around, with the same compelling kind of lyrics. The opening "For Those Who Wait" and also "Desperate," "Core Of My Addiction," and "What I've Overcome" are some of my favorites. Of the two quieter songs, "Name" and "Recovery Begins," I rather like the latter, but the former is a weak point on the CD. It's too average. "Recovery Begins" is hardly the most original song I've ever heard, but it has a softness that is a pleasant end to the CD; it manages in a way that "Name" failed to. Unbreakable may still be my favorite album (it was, after all, the one that won me over to Fireflight), but For Those Who Wait is equal to showing the strength I love to see in music. 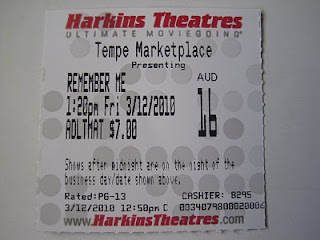 Yesterday, I went to see Remember Me for three reasons: the trailer for Eclipse was playing with it (I only planned to watch the trailer once, so why not on the big screen?), it would be a chance to see Robert Pattinson in a different role (thereby testing my belief that he's a competent actor), and it seemed like a nice movie. Now, I thought that Remember Me's trailer was well put together, but it seemed like one of those trailers that gives you most of the plot. Not the case at all.
I'm a the theatre. I sit through three or so trailers, then the Eclipse ones comes on. I'm nodding to myself, thinking, oh, yes, that trailer seems better put together than the first New Moon one -- it emphasizes "love triangle" more than I'd like, but I suppose that is fitting. Then I remember that I've come to see a completely different movie. From the first, I see it's true that what this movie does, it does uniquely. Poignant is the word to describe it. A love story? Well, yes, but it's more about people trying to interact with and understand each other. And very much about the quote that plays in the trailer and twice in the movie, "Ghandi said that everything you do in life will be insignificant, but it's important that you do it" (I'm going off of memory here: sorry if that isn't it exactly). After you've seen the camera fade in at the beginning and fade out at the end, everything in between all comes together in a way that doesn't always happen. In a literature-like way. It's an emotionally/psychologically artistic movie (not in a complicated way, just a thought-provoking one). I found myself thinking about it all afternoon yesterday. Eventually, it reminded me of this quote from Heart of Darkness (after Kurtz's death), "all the hearts that beat in the darkness" (Joseph Conrad. Barnes & Noble Classics. 2005.) As much as I would love to explain all these "hearts" and the darkness they beat in, I won't on the off-chance that someone reads this who hasn't seen the movie yet. If that's the case, go see it now.
Posted by Deanna Skaggs at 12:40 PM

Labels: Fireflight, For Those Who Wait, Remember Me, Robert Pattinson