Last year, I commented on the first volume of the graphic novel version of Twilight, saying that the format was rather intriguing, even if I would only turn to it for something like this that I already like. I'm not out to read other graphic novels, but I did pick up volume two when it came out this month (okay, so I pre-ordered it on Amazon, but with a list price of $19.99, you didn't expect me to buy it in-store, did you?). Once I had the book, the best part may have been finally being able to do this with the two volumes: 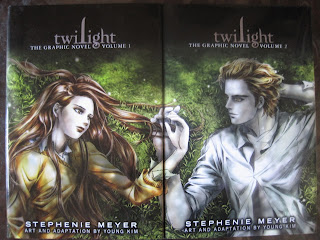 Because the graphic novel format wasn't so new to me this time, I wasn't quite as impressed by the workings and artistry of it. However, it was still a nice way to spend a couple of afternoons. Some of my favorite visual renderings were the Bella's lullaby scene, a wonderful and hilarious shot (to go along with Edward's line about fabricating evidence for Bella's "fall" in Phoenix) of Alice leaping through a window, and the final prom bits. Carlisle's background was also creatively portrayed, and I loved seeing an image of the Cullen house much to closer to how the book describes it than how the movie shows it.

On the negatives, I was a little disappointed by the "Angel" scene. A page or two before, I suddenly realizing that one of my favorite chapters (from the book, that is--the graphic novel doesn't have chapters) was coming up, and I used that brief bit of time to build up some high expectations. It just wasn't the same. The part after they discover the bite was fine, but before that, I wanted more of that dreamy, woozy, other-worldy feeling of pain and contentment (which sounds very odd, I realize). And still, there are pieces of dialogue mixed up or placed in different scenes, so the graphic novels by no means replace the books. But they're interesting and done well, therefore being worth picking up if you either like graphic novels or can't get enough Twilight material.
Posted by Deanna Skaggs at 7:06 PM