View my outline for this "countdown" here, Part 1 here, and Part 2 here.


I've mentioned how much I like The Hillywood Show. If you don't believe me, here is a picture of the corner where my desk is: 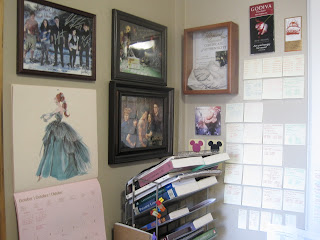 Yes, above my shelves of textbooks and notebooks, to the left of my stickie notes of Latin grammar leftover from the last two years, and to the right of my calendar (yes, it says October: this picture was taken a month ago) are three autographed Hillywood Show pictures and an autographed prop (Ron's sling from their Harry Potter Friday Parody). I just love to support them.

The focus of this post is on their three Twilight parodies. Though each one is around ten minutes long, I like it when I can take the time to watch all three in one sitting. This was a big time for The Hillywood Show: Twilight Parody was the first of their videos to reach a million hits. This was also the time that they made major headway in makeup, costumes, and locations (not that these weren't always good: they just got even better). I remember all the excitement waiting for New Moon Parody: it was as much as for the movie itself, some people even said they were more excited for the parody than the movie. By the time Eclipse Parody came (along with a helpful new HD camera), their work truly (if anyone had any doubts before) moved into the realm of professional (what does professional even mean?).

Does any of that story sound familiar? Isn't that a lot like what happened with the movies? Catherine Hardwicke liked the story of Twilight and made sure it got made and was as good as she could make it; this ultimately led to the indie movie's mainstream attention. New Moon, then, had a great deal of hype set up around it--and a more reasonable budget to work with. For Eclipse, people began to forget that these ever were supposed to be small movies.

But there is more than that. When The Hillywood Show parodies, they really get into the tone of the movie and what makes it what it is. So while there are already significant stylistic differences between the Twilight parodies and the Harry Potter or Vampire Dairies videos, the three individual ones are also unique. Twilight Parody is light-hearted and fun, relying on blue and white colors. New Moon Parody is rather pretty: you notice such things as cinematography and warm colors. Eclipse Parody is sleek, with flawless hair and makeup, going a little edgier. These all reflect the movies on which they are based.

There are even unconscious, probably coincidental things. Twilight Parody has something almost impromptu in its feel that matches the movie. New Moon Parody has potential pacing issues: it's the longest of the three and can start to drag slightly three fourths or so in; similarly, I think the movie does have pacing issues, including some rough cuts between scenes. And while Eclipse Parody is, well, sleek, it doesn't feel like it offers much we haven't seem before (I'm thinking about how MTV called this video a little predictable, as compared to New Moon Parody, which they praised highly). So very interesting!

But let me say it again: I love The Hillywood Show. I love that I found out about them through Twilight. I love their work, and I love their style.

Now the only thing left in my countdown is to read Breaking Dawn again. I'm disappointed I haven't been able to start it yet. But somehow I shall find the time.
Posted by Deanna Skaggs at 11:22 PM