You know, if the William Shakespeare's Star Wars series wasn't so well done, then it would seem ridiculous to continue doing a new book for each movie; Ian Doescher, however, handles it all so that I do in fact remain eager for more. 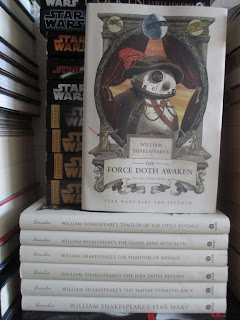 The Force Doth Awaken is the latest. What makes this one a little more, shall we say, precarious, is that we're still in the middle of hearing this story. The other episodes could have references to what was coming next or to what a character might be thinking at a certain moment (but that audiences at the time the movie came out might not have known yet), but The Force Awakens is the only piece of the puzzle we have for the new trilogy. So in many ways that did limit what this book could do. It's almost more in that regards like the first Shakespeare's book. That book was more about translating the movie's dialogue into Shakespearean language. As the books continued, they grew, filling out with soliloquies and other lengthy bits and numerous references to particular passages in Shakespeare. Because the content of this episode is still ambiguous, there couldn't be as much of that type of content, so this book does go somewhat back to the older style of just changing the language (though I think in a much more complete way than that first book did). Example: we don't I think really know everything Kylo Ren was thinking (or the precise reasons behind what he says or does) in moments like the interrogation scene or the final lightsaber duel, so when this book did add to the dialogue it could only add obvious things that we do know for certain (like his surprise at finding out Rey's strength in the Force).

All of this isn't to say that Ian Doescher didn't take advantage of some opportunities to wax poetic. In particular, when Han approaches his son and later when Leia senses Han's loss. Oh, and I do love that the "balcony scene" in the film becomes an actual balcony scene in this book. The balcony scene being Rey standing up above Han and Kylo on Starkiller Base (for anyone interested in that particular Rey/Kylo theory).

You know, a thought occurred to me while reading this book. You know how some people are hoping that Rey isn't in fact related to any of the familiar characters? I realized that if their theory is correct and Rey is just a person (as opposed to Luke's daughter or Leia's daughter or Obi-Wan's daughter or Anakin reincarnated or Phasma's daughter, etc.), then that means two things. One, it shows that everyone is important. Two, when Anakin and Luke's lightsaber flies to her instead of to Kylo, it shows that we all have a personal choice about who we decide to be. Kylo is Luke's nephew and Anakin's grandson, but the lightsaber aligns with the light side and he has chosen the dark side, so it shuns him. Rey is currently on the light side, so it accepted her based on that association despite the blood connection with Kylo. Perhaps Rey will turn out to be related to the Skywalker line (or there will be another connection), but I like this concept that it was the choice of alignment that allowed her to take the saber. And it was the way that the dialogue comes out in this book that made me think of that.

So, yes, I am still having a good time with these books. They're quick reads, too, which is probably also what helps. They're not overdone; they're just right. And like with the other more recent ones, there really isn't much comedy to it anymore. It's fun and it's serious. (Well, there was a bit of comedy with the two stormtroopers talking about the repetitive nature of Star Wars stories--that was lovely.) And you also don't really need to read all of them; you could just jump in and read only this one (or this one first and the rest later).
Posted by Deanna Skaggs at 4:47 PM