I've recently been introduced to Local Nomad in Uptown Phoenix. Among the local gift items in the shop are also some chocolates made in state. I picked up two for now, so we'll start with Monsoon Chocolate. This is the Esmeraldas Ecuador 75% Dark Chocolate from their origin series. Specifically, the cocoa here is from a family-owned farm in the region that used to be cattle pastures. This puts in mind another company I looked at recently who were highlighting the healthy environmental changes of certain regions growing back to sustainable farming. So besides Monsoon being an Arizona company (they're based out of Tucson), I also appreciate the type of cocoa that they source. 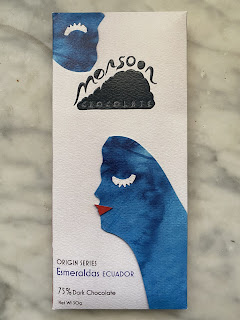 Their packaging takes the fold-out envelope approach that has been so popular lately. But the artwork is quite unique. It's fairly modern in style, yet also has a certain earthiness in the textures evoked. One of the advantages to the envelope style, as I've mentioned before, is that it can make a fairly small bar appear bigger. In order to work toward truly fair trade cocoa, I think we also need to simply consume less. This bar is definitely on the smaller side at 50 grams, but I quite like that size and the size of the card box makes the bar feel more substantial to the average consumer. 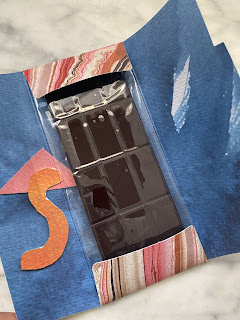 Inside its clear wrapper, the chocolate bar is in a simple arrangement of rectangles. Yet the basic look here is slightly unique as well: the rectangles are much longer than usual. Somehow this adds to the artsy vibe. I'll probably keep repeating this all summer long, but just ignore the slight imperfection in the surface. That's probably due to me not going straight home with the chocolate after buying it (though I certainly didn't leave it in the car to experience its melting death). 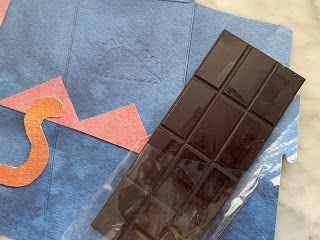 Other than that slight weather imperfection, the surface looks good. There is a mild cocoa aroma along a possible hint of lightly bitter notes. The snap is great, and the inside of the chocolate looks perfect. The initial taste is quite mellow and soft, then I get what could almost be a ripe banana flavor before the taste moves on just the slightest but not quite developed hint of bitterness. At this point, the chocolate mellows out again and then becomes just simple, smooth cocoa flavor, neither bitter nor sweet. The level of depth does increase a bit in the last stage, with a hint of darkness between the lines of the cocoa finish.
Texture-wise, there is a healthy smoothness. It's neither grainy nor plasticy. From this bar, I can see why Monsoon has placed at the International Chocolate Awards for their chocolates. And not only am I curious to try more of the origin bars, but I am also hopelessly intrigued by the Mesquite White Chocolate and the Blue Corn Atole White Chocolate. Perhaps a trip to their shop in Tucson is in order?
Posted by Deanna Skaggs at 12:11 PM