I didn't feel like reading Stephenie Meyer's The Host until just recently. It just didn't seem to appeal to me (though I can say the same for Twilight), but when I heard about the first anniversary of its publication a little while ago, I decided to look into it some more. I'd read the prologue on Stephenie's site, but this time, I read some of Chapter 4 (which is the other sample she gives.) I had to know more about these characters, simple as that, so I went out and bought the book that weekend. 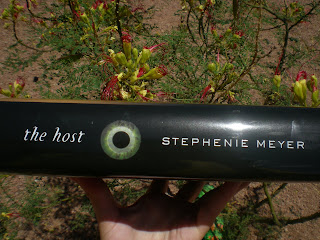 I finished it in five days, about a week ago. One thing I just have to like about it is that it takes place, for the most part, in Arizona. It's just wonderful to see someone else who loves it here, as well. In honor of this, I photographed the book outside. I couldn't choose which picture I liked best, so here are my two favorites. The second one really makes the already-creepy cover look even creepier. . . 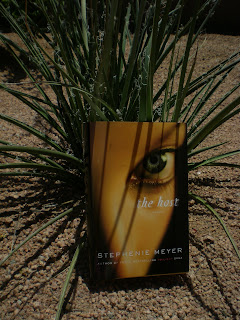 A quick rundown of the plot: Earth is taken over by "souls" that live like parasites in the "host" bodies of humans. There are a still some people left resisting them, including Melanie, who is captured and given as the host for Wanderer. Melanie won't give up control of her mind, though, and she makes Wanderer love the same things she does, so they go in search of the resistance.
There's something about Stephenie Meyer that's going to make me keep up with her writing, whatever the plot summaries are. She does something with a person's internal mind that's very addictive. With The Host, she considers the idea of identity. How much of what a person is like is his choice? How much is just the way he's designed? What can you change and what is inevitable?
That said, it was an interesting read. I especially liked the last bit, with Wanderer's decision. Here's another thing about Stephenie: she can show a character who makes a choice he or she believes in entirely as the right thing, but it's a choice that can be questioned. A choice that you want to disagree with, but may not be able to say whether it's right or wrong. In any case, I'm happy with the final ending and would be fine with just letting it stay that way. But if The Host ends up being a trilogy. . . well, I'd keep reading, but the book is complete enough in itself, it seems.
Posted by Deanna Skaggs at 2:12 PM