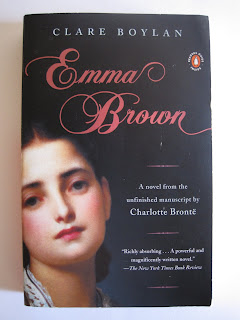 It's no secret that I love Charlotte Bronte. So when I stumbled across this book at the bargain section in Barnes & Noble, it quite literally jumped into my hands. I had no choice but to buy it. I'd heard of the draft Charlotte left when she died, and I think I'd even heard of someone finishing the novel, but somehow I saved the information for later instead of hurrying out to find the book. Bear with me while I bounce back and forth between opinions of it.
When I first took a look at it, I was a little annoyed that only Clare Boylan's name is listed as the author, even if Charlotte is mentioned on the cover. Who did this Boylan character think she was, coming over and stealing Charlotte's idea and taking all the credit?
Like many first impressions, I don't feel the same way anymore. I still have trouble understanding how anyone could want to finish another person's work. Finish, not just experiment with finishing. And publish it, too. The answer is probably to keep Charlotte's voice alive, but you see, I think that every person has a unique voice no matter how hard he or she tries to imitate someone else's. Clare Boylan tried, but I can still tell so clearly that Charlotte wasn't the one to write this book.
After all, there were only two short chapters in the draft. The entire plot after that is of Boylan's making. She does explain that she added some pieces of Charlotte's letters into the book to give it more Bronte flavor, but even still, I find it very different. After the first few chapters, I was rarely reminded of Charlotte.
The tricky thing, though, is that even Charlotte would have made this book different from her others. It came from a different time in her life, when she had learned and experienced different things. But I still don't think it would've been quite the novel Boylan wrote.
Which brings us to the big question: Is this a bad thing? I can't answer yes. Emma Brown is an absorbing read, endowed with some of the best parts of nineteenth century and modern writing. It has beautiful, original imagery that's often lacking in books today. Its social commentary is direct and while designed around a different century, can still be brought to apply to our world. That's plenty to make a worthy book.
Posted by Deanna Skaggs at 3:34 PM