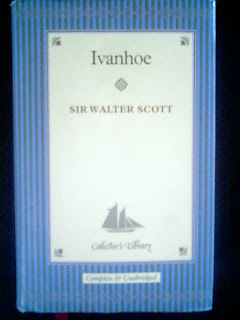 (I haven't posted in a while again because my computer's been having trouble. I had to send it to Apple for a while, but it still isn't working right. Think it's time to demand a new one. Also, the picture is blurry because I had to take it on my phone.)
I just finished Sir Walter Scott's Ivanhoe last Friday. Interesting read. At first, I was looking at the poetry of its writing/descriptions, which in itself make it worthwhile. Then I thought about it historically. If Scott is the father of the historical novel, historical fiction has still changed very much since his time. The way he described medieval clothing or mechanisms reminded me of how C.S. Lewis talks to his readers in The Chronicles of Narnia. They both give a comparison to something the reader will be familiar with. Today, though, historical fiction seems to envelope itself in the time period. Authors don't want to remind you that there is such thing as the present day; everything they say is a part of the period. Then again, a lot of people today seem to like using a first person perspective, which eliminates the possibility for Scott's style.
So that's what I was thinking about earlier in the book. That and the fact that Rebecca struck me as a much more interesting character than Rowena, despite the fact that Rowena was the one Ivanhoe loved. I was surprised to find Rebecca become even more important in the story than Rowena. No wonder the book could've been called Rebecca the Jewess. It's more about Rebecca than Ivanhoe, I think.
After I finished reading, I looked a little at the controversy over the ending. And yes, I can see how people would want Rebecca and Ivanhoe to end up together, but that ending wouldn't be as powerful. In keeping with the feel of the entire novel, Ivanhoe and Rowena have to be the ones together. There's just no other way. Even if Rebecca weren't Jewish or there was no discrimination, the knight and his lady have to have their "happy ending." That it isn't completely happy is what makes it interesting. Though I still do wish that there was a way to ensure Rebecca's happiness. She doesn't need to be with Ivanhoe, I'd just love to see her with a more bright future than simply servitude.
Posted by Deanna Skaggs at 1:48 PM