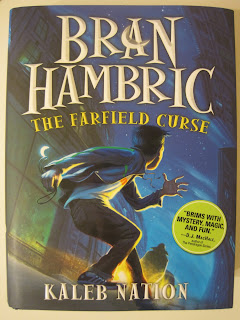 Alright, here is the book I was reading last week: Bran Hambric: The Farfield Curse by Kaleb Nation. I was only a few chapters in on my last post, but guess what attached itself to my hands all weekend long, allowing me to finish on Sunday night?
First, a little background. I started reading Kaleb's site, twilightguy.com, around March. It's a blog that recorded his thoughts on reading the Twilight books, chapter by chapter. What I loved about the posts was the unique perspective Kaleb had, with random humor and keep perceptiveness. So I started to get . . . curious about his book. Finally, I gave in and preordered it about a week in advance (it was just released on September 9th.) I still wasn't expecting to be particularly drawn in; I just wanted to support Kaleb and maybe find some of his humor in the book. Especially since I'd read the first four chapters online already, I didn't expect any more.
But Bran Hambric is about as unique as twilightguy.com. It's a teen read, dealing with magic and mysterious pasts, yet it's its own world. I think people are often tempted to create a fantasy (or halfway fantasy, like this one) setting based off of the ones they already know. While there are elements that we all love to keep, this can hinder originality. Kaleb Nation's originality isn't hindered. Neither the setting nor all the turns of the story are predictable. I especially like that when we learn about the main character Bran's past, we don't learn that he is some great, mythical figure destined to set all the world to right. We learn that he has a vast potential for evil, if he chooses. But by Bran not choosing to follow that, we get into some great themes about choice and identity.
There are still a few rougher corners, I think, given that it's a first novel, though in such a way that it can be passed over. I prefer to look at the good things. We have some parallelism in the plot (Bran's choices and Rosie's), some intriguing imagery, and yes, great humor. In fact, that's what makes this book worth reading: it's fun.
You can purchase it at these links: Amazon, Barnes & Noble, and Borders.
The book signing tour will be in Tempe next week; I think I'll just have to go.
Posted by Deanna Skaggs at 7:03 PM