I did end up at Changing Hands Bookstore last night for Kaleb Nation's book signing (promoting his new/first book Bran Hambric: The Farfield Curse.) There's one benefit of living in a city: I can actually go to events like this. I'm still trying to figure out whether I like that more than looking outside and seeing more than buildings and pavement and cultivated grass and more buildings.
I'm a little ashamed to say that I'd never been to Changing Hands. It's such a famous place, and I've certainly been close by many times. I took a look around before the signing; they have a great selection. I'll make it a point to go back.
And on to the signing. It's strange seeing someone in person after only seeing pictures/videos of them online, but it was great to be able to go. Kaleb has too many talents: he can do public speaking just as well as writing. He also read the book's prologue. It's always interesting to hear an author read their own work; you get to hear just exactly what these words are in their minds. There are so many ways you can interpret words on a page, so hearing them shows you how the writer interprets them. And here is my first signed book (minus a picture book from 2nd grade, I'm not counting that one . . . ) : 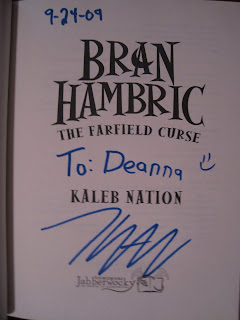 I asked him to date it because it is his first tour, that date will mean something in a few years. It's epic. Last bit of info: the letters for the sequel are TSK. I'm thinking "The Secret . . ." Maybe "Kingdom?" That just sounds like Atlantis, though. There's also "King" and "Second" . . . how about "The Second Kurse?" It could be an intentional typo . . .
I had to leave quickly to finish writing a paper, study for a Latin quiz. Speaking of which, I have half an hour until that quiz, so I'd better glance at my notes again before I need to rush off.
Posted by Deanna Skaggs at 10:46 AM