I've been busy this past week, I guess. On Thursday, I stopped to watch Where The Wild Things Are on my way home; I'd been to the Toy Story 3D double-feature a couple weeks earlier, so I guess I'm falling for the kids' movies lately. I know the former book is such a classic and I remember seeing advertising and such for it, but I don't remember actually reading it. I knew the gist of the story, at least, though. It makes for an interesting movie, not the average fuzzy family film. Even better that I saw it on the Harkin's Cine Capri screen for the first time. That screen is huge, especially given that there were only sixteen people watching. Yes, I counted.
Sunday night I went to the Fireflight concert. I've known they'd be in Arizona for a while, but I didn't think I'd be able to make it. I was glad I did. Abandon and Remedy Drive also played; nice to hear live, but I don't plan on getting into their music. This was probably my first rock concert . . . I didn't like "loud" music before. And the upside to liking a small band is that you can actually meet them. I got to have my bag (which I bought there before the show started) signed by the band. 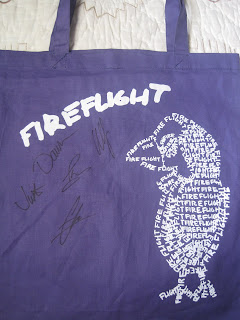 Yesterday, I finished Alice Sebold's The Lovely Bones. It was one of those books I'd heard about, thought I should maybe read, never got to. With Peter Jackson's movie version coming out soon, which I thought I might like to see, I decided I'd better get to reading first. I knew the basic story: a girl is murdered and she watches her family in the aftermath from heaven. I can't say it was quite what I expected, though. I don't want to go off and give spoilers, but I will say that it was a good read. I like imagery (along with metaphors and such), which this book has in clear originality. And predictable can get boring . . . this book wasn't all predictable. I expected Susie's case to be solved at the end; it wasn't really because there was another point to it all. I like that this book remains simple while still making you think. (Molly really liked it, too. She said it tasted delicious, hence my taping together of the cover after her teeth attacked it. All this time, I thought she was a good dog.) 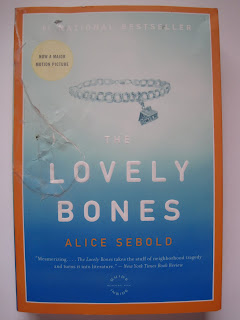 And today I got the CD's for the audio drama on CS Lewis's The Screwtape Letters (which happens to star Andy Serkis aka Gollum as Screwtape.) So far, I'm loving the design work on the website and packaging. It fits in perfectly with the crazy tone of the book. I listened to the first two letters when I got home; I'll give my opinion when I've moved through the whole thing. 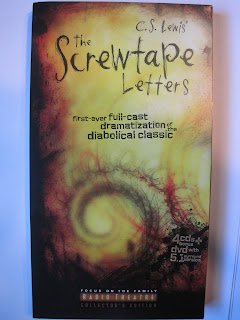 Last thing: today was freezing. I know, a high of 60 degrees isn't that bad, but it was 87 two days ago. A little transition, please? And the wind. It would've been nice weather (except for the cold morning -- and evening that's settling in) without the wind. I don't like wind. A bit of breeze on a hot day is nice; rushing wind on a cold day is horrible. But it seems that the weather will go back up soon.
Posted by Deanna Skaggs at 4:50 PM

Labels: Fireflight, The Lovely Bones, The Screwtape Letters, weather, Where the Wild Things Are