I just spent a lovely morning. Up at 9:30; breakfast of half a chocolate muffin and coffee, which is unusual for me but also quite American. Dropped off my latest Netflix rental (The Runaways, which I enjoyed more this second time around; the commentary with Kristen, Dakota, and Joan was also very good) and headed off to Scottsdale Fashion Square.

It takes two buses to get there, but the second distance is so short that I walked instead. Very pleasant fifteen, twenty minute walk; the weather is still shying from the 100's and even cautious of the 90's, so it wasn't overly warm. Then to the mall itself. A little window-shopping before stopping at Sephora. I had two things in mind. One was to claim my free birthday gift (a mascara, eye liner, and eye shadow -- not bad at all just for being a member of their rewards program). The other was to try out Urban Decay's eye primer, which comes in the most enchanting bottle. Now, I have trouble with eye makeup. Regular liner doesn't stay put on the top; only liquid does. Eye shadow? Forget it. I've had to make do with putting only lighter colors right above my lid, but that's weird and doesn't allow me to play with all the fun colors and techniques. Neither Merle Norman's nor mark's primers have helped. But Urban Decay . . . oh, I swoon. Shadow generally starts to crease not two minutes after I put it on, but I've had this Urban-Decay-primer-enhanced one on for about three hours, a portion of that out walking in the 90 degree sun. And it's still on. I'm thrilled; I'm ecstatic; I'm amazed. 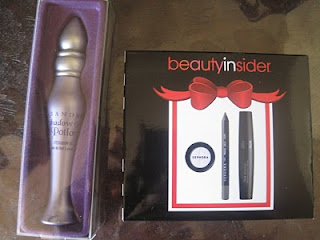 Getting home, I must've been suffering ill-effects of my American breakfast: I was craving a greasy lunch. "What do I have that's greasy?" I wondered without hope. Ah -- I put a veggie burger to heat on the stove, two slices of Trader Joe's Whole Grain bread in the toaster, added a slice of cheese, and got a couple of sticks of celery to add to the side. Yes, that was my "greasy" lunch. Very beautiful, though.
Now, I think my geology textbook (and subsequent quizes) call to me.
Posted by Deanna Skaggs at 3:04 PM