Happy Christmas, everyone? Watching Les Mis on Christmas last year put us all in mind, I suppose, to go and see something this year also. And what better than a touch of Disney magic on Christmas? So we went to see Saving Mr. Banks, which, as you know, is about Walt Disney trying to convince the author of Mary Poppins to sell them the movie rights. It was sprightly, sad, inspiring, and layered--and there are minor spoilers below the penguin picture. 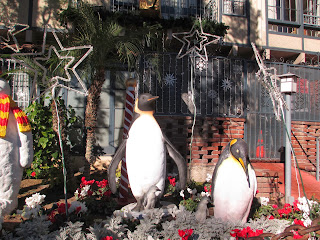 Christmas Penguins at the Mission Inn in Riverside, CA

I've never really made a connection to Mary Poppins. When I was younger, I remember not getting the sense of fantasy and whimsy that I thought I was supposed to get; now I realize that whimsy isn't really the point of the movie. So watching Saving Mr. Banks has helped me understand what the much-loved movie is really about. Of course I never made a connection with it before: I was looking at it from the wrong angle.

What's interesting about this new movie is its format. You have the 1961 timeline, with the grown and grumpy Mrs. Travers. Then there are the flashbacks to her as an imaginative, intelligent girl--and you wonder what happened in between to cause the change. Slowly, we come to understand the situation. Tragedy pairs alongside fantasy; the mix is not at all unlike what I have observed in the few Australian films I've watched. And from the prim Mrs. Travers's disdain of the Disney style, the question comes of whether or not fantasy does take away from reality or give a false image of the world. But as I've always felt, the movie goes on to reveal that that isn't the role of fantasy: fantasy can be hope and healing. That's what the world has loved about Disney from the start. And, you know, it's kind of refreshing to have that same message of hope relayed to us through a different form: you don't get that many Disney biopics. (This isn't exactly a biopic, I suppose, but it's similar.) So as a film and even as a Christmas Day film, Saving Mr. Banks is well worth the journey. Sometimes discovering how you got to a place is even more important than the place itself.

Posted by Deanna Skaggs at 2:03 PM