1) Loose, Bulk, Organic, Fair Trade Darjeeling Tea - A mouthful, yes? Well, that's the type of tea I'd been looking for--I thought it would be quality, ethical, and environmentally-friendly. Because I am trying; we do need to try. I had just settled on the next best thing when I stumbled into a little shop in Prescott on a street just off the Square. It's called Nectar Apothecary, and they sell essential oils, some remedies, and bulk spices and tea. I got my tea in a little plastic bag this time, but in the future I'd like to bring my own glass container and ask them to fill that for me instead. 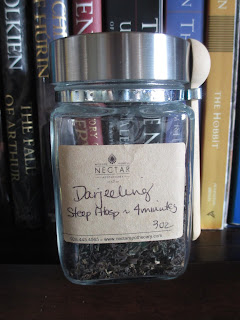 2) Tarte Tarteist Creamy Matte Lip Paint in Hangry/Berry - This is just a sample size; I got it because it was from Tarte, then became disappointed when I saw how dark it was. Given that I have dark, dark brown eyes, I usually avoid dark lip colors because I feel like they make me look too dark (side note: like in Once Upon a Time, they give Regina dark lipstick when she's being more evil and pinker lipstick when she's trying to be good). But it's actually such a nice product that the color is okay; I tried it out at the Santa Fe Opera because I thought it might make me feel formal rather than dark. Even though it's one of those liquids that goes on matte, it doesn't feel drying at all. And it fades away well, especially considering that it's so dark. As it fades (unattended) it just becomes more pink. I wasn't at all interested in these lip paints before, but now that I've tried it I would consider buying it (though, yes, I would choose a different color). 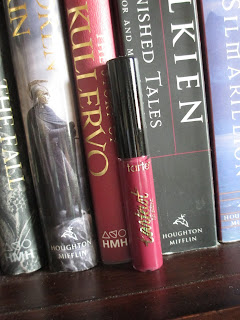 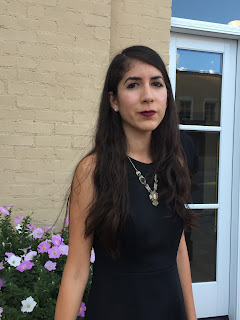 3) Carved Wooden Animals - Just outside of Santa Fe is a place called El Rancho de las Golondrinas (Ranch of the Swallows). It's, well, an old ranch with old buildings, fields, and things and helpful volunteers dressed period style to tell you all about the location and the setting. Very nice for a visit. They also happen to carry a couple of great items in their gift shop. The first time I went there, oh, about twelve years ago, I bought a little hand-carved wooden dog. When I've gone back since then, I try and get more of these beasties. A sheep, a fox, a little deer or something, a donkey, a couple of rabbits. This time I added to my collection with the duck and the bull on the left. 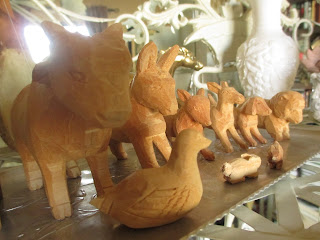 4) Carved Leaf Pendant - If you know Santa Fe, you know that outside the Palace of the Governors (which is a museum right on the Plaza), different Native American artists set out their jewelry to sell. So while I was there, I strolled by, looking at everyone's work until I found the thing that called to me. There are some simpler or "more expected" things for sale and also some very beautiful work--but we have some of this type of jewelry in Arizona, too. (There's a lookout point near Flagstaff, for instance, where the artists put out their tables.) So I had to just get what I felt like I would only find there and what I really wanted to get. I considered a necklace with alternating beads of turquoise and silver. But what I came away with was this leaf from Lloyd Garcia. I do love the leaves, and I suppose that with this one and my shed antler leaf pendant, I'm getting a collection of them. The color and design were very me. Rather than buy a new chain, I just paired it with one I already had. 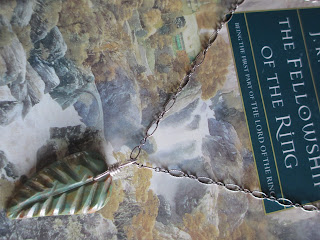 5) Oaxacan Alligator - I didn't think I would find any Oaxacan painted animals for my collection in Santa Fe, but there were a few at two stores that I saw. This alligator has plenty of detail, and it's a nice size compared with my other ones. If you haven't seen then before, I collect only the free ones. And they're really starting to look great together now that there are so many. 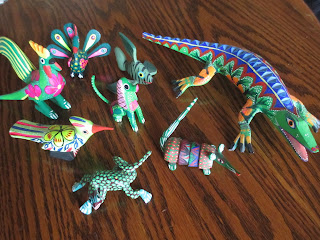 6) Global Girlfriend Scarf - More green. This scarf is not from Santa Fe; it's from the Desert Botanical Garden's gift shop (in Phoenix). It's silk and cotton and and made fair trade by women, hence the name--you're helping out your "global girlfriends" by purchasing. Besides the color, I just love the finish of the materials. The main part has more of the raw look of linen and the ends have a nice shine to them. 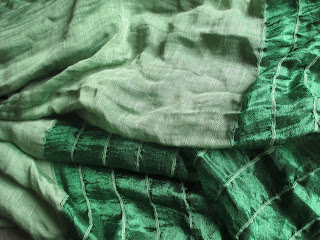 7) Zucchini in the Morning - Last month I mentioned that I was throwing the squash blossoms into omelets. Well, now that the plants are giving off a good amount of zucchini (and there are only two of them this year), I've been trying to eat zucchini more often. So sometimes for breakfast, I'll just chop up a zucchini and put it in a pan with some oil, salt, pepper, a pretend amount of garlic, and a small dash of oregano (also from the garden). While that's sautéing, make an egg and toast some bread with butter--and there you go. The difference in taste between these and the (organic) ones from the store is amazing. As Barbara Kingsolver said, no wonder we don't want to eat out vegetables when they have no flavor. 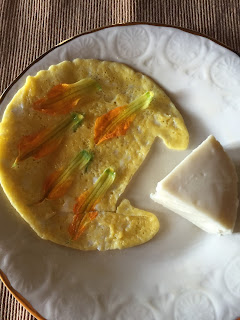 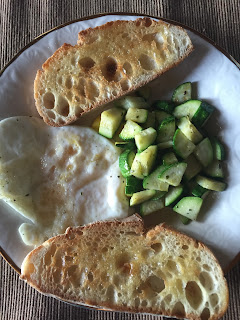 8) Chelsea & Violet White Dress/Whatever-It-Is - It's sort of in the shape of an Empire-style dress (think Jane Austen era). But it only buttons down to the (high) waist. There is lace on top and the rest is this sheer material. I loved wearing it in Santa Fe because I put on very practical gray shorts, green tank top, and Abeo shoes but then threw on this drapey, pretty thing that would flow behind me slightly when I walked. (Remember, I like long coats, so this is basically the same effect here.) It's the same outfit I had on for that picture outside of Chocolate + Cashmere that I included with my review on Friday. 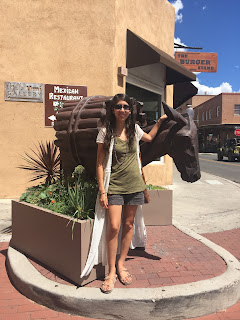 9) Getting to Unbox my Book & its Merch - And July, of course, is the month when my book, Black Tree, came out. I was so nervous to open the box that had my proof copy, but when my two boxes came with some additional copies, my nervousness turned to excitement. And now I also have new business cards, bookmarks, flyers, stickers, and matching address labels (by the way, I'll extend this invitation to anyone who's read this far down: send me an email [my info is on the Contact page] if you'd like some of this merch and I'll send a couple to you). The last item? Cookies with my book cover. I'll get you some more pictures of those later, too. 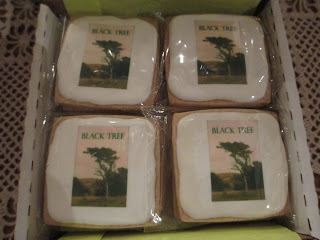 10) Minimal Makeup - Lastly, we go back to image. Minimal makeup, for me, basically just means not wearing eyeshadow and only wearing eyeliner on the outer half of my bottom lash. Maybe because I've been too lazy, maybe because it's summer, maybe because I've been more into the natural look, I just haven't been going for the eyeshadow and the rest of the eyeliner lately. I do like eyeshadow, but I don't need or want it right now. Simple makeup and a cheery pink lip color has been my summer makeup look.

Posted by Deanna Skaggs at 8:17 PM