What was so nice this year was the way in which Fourth of July was not just one day but rather a whole weekend. And since I keep collecting flag shirts, I had just enough to wear one on each of the three days. This year I was able to just spend time in a couple of places around the area.

Saturday was for Out of Africa, which I had been hoping to visit one of these days when the weather seemed a little cooler. It was the perfect day for it: there was some cloud coverage to keep the temperature down and there was even a light misting of sprinkles a couple of times. The animals looked like they were enjoying the weather, too.

Tiger Splash had two tigers (I think Journey and Gabriel), one white and one orange. I think I had only seen the show with one tiger; two of them is another dynamic. They have to put in an extra effort to keep an eye on both of them and engage both of them at the right moments. One of the highlights was seeing them both in the water watching the toy above them, seeing who would get to have it. 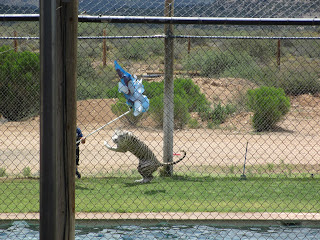 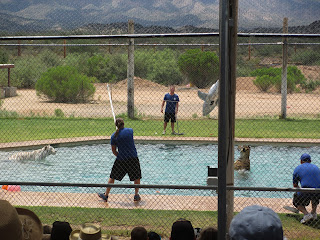 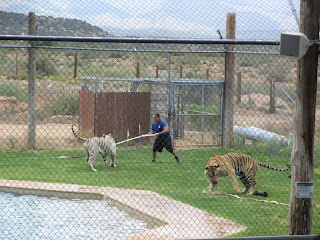 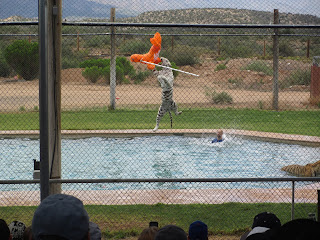 Oh, yes, and here is Chalet; she often does Tiger Splash on busy days because she does such great jumps into the water to get the toys. On Saturday she was enjoying a nice nap instead. 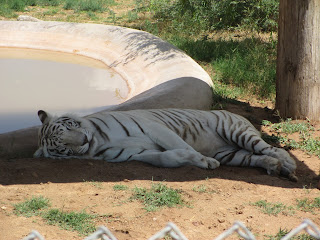 The 3:00 show had the hyenas, though they don't go in with them anymore. As the keeper said to one of the hyenas while he was petting him, "We have a great relationship . . . through the fence." Still a great opportunity to see the hyenas and learn about them--they're one of my favorite animals at the park. 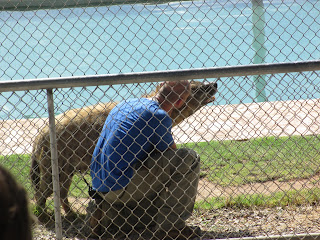 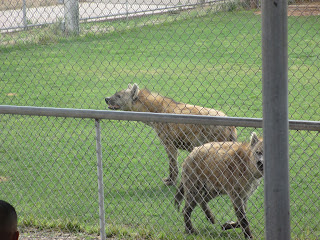 Then, of course, there was Cypress, the grizzly bear. She was right next to the fence, so I had to get a picture with her. Then as soon as I walked away, so did she. 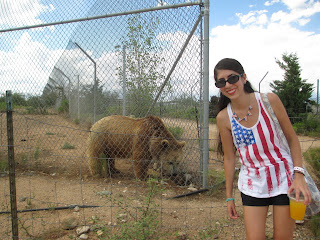 Sunday was a Flagstaff day. Lunch at Criollo, which uses a lot of fresh and local ingredients and products. Afternoon at the Arboretum. Perfect weather, in the seventies with both clouds and sun and just a bit of breeze. Flagstaff is beautiful in summer. And the Arboretum always makes me want to grow more plants, herbs and teas and flowers. Their butterfly exhibit is open now and while it's smaller than the one at the Desert Botanical Garden in Phoenix, there are also less people, so you still get a chance to see lots of beautiful butterflies up close. 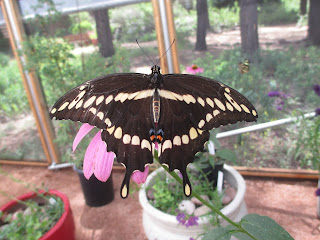 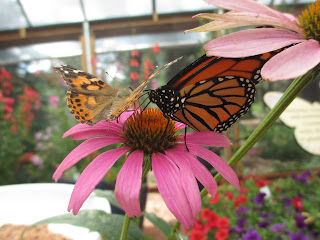 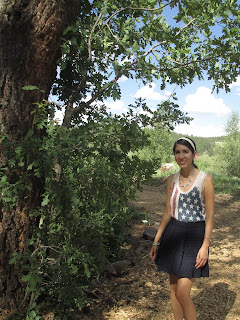 I'd been thinking of Tempe Town Lake for the Fourth on Monday; as the day got closer, I thought it would have to be Prescott instead. But instead we ended up back in Flagstaff for the event at the Continental Country Club area. While the fireworks certainly aren't as numerous as those in Tempe, Flagstaff was all the same a very nice experience. Arriving in late afternoon, the weather was beautiful for sitting out on the lawn (the golf course, actually); we sat right by the water. The food vendors available were good (I probably spend most of my time walking back and forth to get lemonade, tacos, more lemonade, funnel cake, watermelon, ice cream, and churros). As it gets darker, more people start arriving, but still the crowds are nothing like Tempe; you actually have a little breathing space here.

We were playing ring toss with glow sticks and trying out our 3D fireworks glasses while we waited for the actual fireworks to start. If you haven't tried those glasses yet, they're quite an experience. Very psychedelic. Every light gets reflections all around it so that even the street looks like a light show. The glow lights look amazing--we were giving ourselves headaches by trying to play ring toss with the glasses on. The fireworks look pretty cool with them, too; since this show was a little more bare, it was a good one to try one the glasses on. You still see the firework itself normal; it just has reflections of light and color framing it. I watched about half the time with the glasses and half without, on and off. 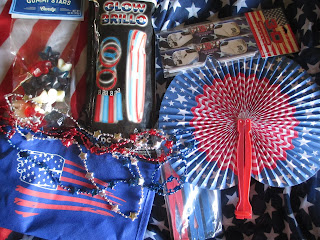 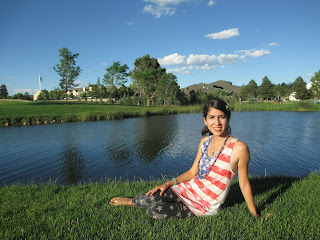 Labels: Arboretum, Flagstaff, Fourth of July, Out of Africa