Reflections on the Fourth Wall

Lately I have been obsessed with the fourth wall.

The greatest flaw, supposedly, of a book is the last page, specifically the fact that finishing reading the last page pulls the reader away from whatever realness the book created while its pages lasted. Likewise for the dropping of the curtain at the end of a stage production.

But is such really the case? And I'm not just referring to the positive effect that the intentional breaking of the fourth wall (that is, the realm of metafiction) can have on art. I'm talking about what we as the readers or the viewers bring to that wall or ask of that wall or otherwise receive from that wall that enhances our experience.

Let me give some background. Lately (let's say in about the past year) I've been watching a lot of Disneyland videos on YouTube. I stumbled on Fresh Baked and Briberry while looking for Star Wars content. Later I watched the "Confessions of a Retired Disney Princess" video and also found Subway Mouse's channel, Olivia Simone's most recently. I love Disneyland, so naturally I loved hearing behind the scenes stories about how things work/flow or simply who Disney people were and how they came to work there.

(I feel like I should mention here that my intention is not and was not to be creepy or disrespectful. Disney employees and other performers of course have the right to private lives. I don't want to know where they live or where they shop or what they had for breakfast. I just find the voluntarily shared details or the details that you see from observing say one "version" of a character versus another interesting.)

It's fascinating to me to watch these videos and observe that: Wow, that Alice has been there for years, but of course because she's the best one. Yeah, that Hatter was a dancer; he can't hold still, and that was why he brought such great energy to the character. Hmm, so they basically have to be the type of people who always know how to keep a conversation going (or change its course). Oh, is that how they do auditions? Okay, so certain roles like character hosts often go to people who just don't look like any of the characters but still have the personality for it. Look at that, I've never seen any of them break character except for that one time that one boy broke Hatter, Alice, and somewhat Cruella all in one go (Peter Pan didn't break).

Little things here and there. Like seeing how characters recognize certain guests who are there all the time. Or the fact that after watching all of Briberry's videos, you suddenly can tell when the same person is portraying a different character than they usually do--or maybe you even recognize someone out of character. And all of the inside jokes and references to old videos that show how much Disney people love Disney, whether they're in character or out of character. 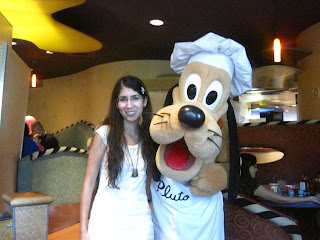 I have met some characters. Picture from 2013.

The thing is, I never had much interest in the characters at Disneyland. I still don't know that I would be that interested in meeting them, but I have come to appreciate and enjoy their form of live performance entertainment and interaction. It's this extra angle that's gotten me interested. And isn't that often the case? (Though most of this post is about Disneyland, I don't mean to say that my current interest in the fourth wall is only in terms of Disneyland.)

I've always loved watching making of videos for movies, long before DVDs with all their menus of special features came out. I'm talking about the thirty seconds of behind the scenes that would play at the end of some of the Wishbone episodes, or the feature that played at the end of the Wizard of Oz VHS or the ones that played before the Special Editions of the Star Wars VHS trilogy.

And sometimes when you finish reading a book, you don't react in shock that you're pulled out of that world and back into reality. Instead, you go seeking more emphasis on the fourth wall. You read the author's afterword, or a scholar's introduction. Maybe you seek out the author's biography.

The awareness of fiction's state as fiction does not detract from the experience; rather, this awareness and interaction with this awareness often enhances the experience. It gives you an extra layer (or many extra layers) through which to view this piece. Though you lose the sense of reality that comes with forgetting that the piece is fiction, you gain the tangible feeling of something that was created in the real world by real people.

That's creation, isn't it? And art is creation.

Posted by Deanna Skaggs at 4:04 PM