In my first look at Black Butterfly Artisan Chocolates, I went over the store and other details. Now I'm focusing in on just the three chocolates that I chose this last time that I was there (it looks like I will probably always make a stop at Black Butterfly whenever I'm in Prescott from now on).

Some places keep the same flavors all the time; it looks like Black Butterfly is going to be either rotating flavors or continuously introducing new ones. There were some of the same ones as before, though, so don't worry that you'll never be able to get your favorite again. For me, though, changing up flavors is nice because then I have new things to review. 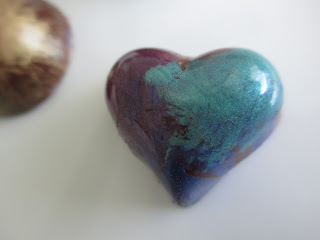 I may perhaps have chosen a random assortment. First up is the violet truffle (I didn't take down specific names this time), which comes in a heart shape. The colors on this one are blue and purple; unfortunately, the pictures don't really show the paint job very well. At first I found the violet flavor more subtle than I was expecting, but then I found that it was balanced. Violet in general is a strong and overwhelming flavor, and for that reason it does linger on as an aftertaste after the chocolate melts. So it works to keep it as a lighter flavor in the beginning so that it doesn't become too strong. The dark chocolate that accompanies the violet-flavored ganache is fruity and sweet, not too dark; it makes for a good companion to the tangy, floral violet taste. Because of the floral flavor and the heart shape, I'm picturing a box filled with these as a gift for an anniversary or birthday, a pretty and girly gift. 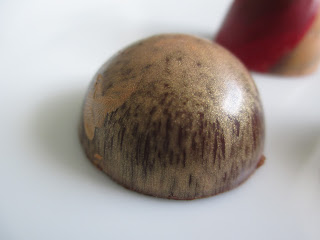 Now for a change of pace we have apricot and cashew, which come in a half circle shape with golden tan paint. In the picture, you can see the cashew on the bottom with the apricot layer on top. The apricot is tangy, more like the fruit itself than like a sweet jelly. The cashew grounds the tangy flavor and adds earthiness; I think perhaps it might have a touch of salt. This chocolate is lighter, giving a more casual and sweeter angle to it all (since, as I mentioned, the apricot doesn't have any sweetness on its own). Basically this one grows from the concept of peanut butter and jelly. As such, it's an interesting chocolate, one to make you think and feel. It makes you think of other things while also introducing its own flavor profile. 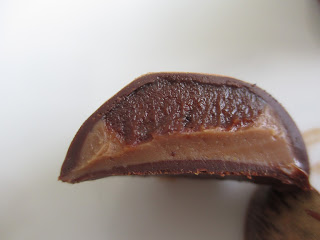 The last chocolate is simply peanut butter; its shape is tall and its colors are red and pale orange. I would have fully expected this to be my least favorite of the three simply because of personal tastes. While I do like peanut butter, I've been buying the organic one from Trader Joe's for so long that I usually can't stand the more oily, sugary peanut butter that most people favor--and since that's what people favor, chocolates usually have to try and replicate that taste simply in order to make what people like. This chocolate's peanut butter filling, however, stands somewhere in between the two sides. 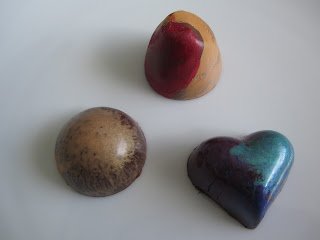 It's of course creamier than two-ingredient peanut butter because it's a chocolate filling. But it doesn't taste cheaply oily. And it still has the full peanut flavor, with a bit of salt. It fills the mouth with its flavor, while the border of chocolates adds in a little sweetness. Then, as the chocolate melts and you're trying to still analyze the peanut butter flavor, you're left with an earthy taste that fades into a light spice. (I want to say it's cayenne, but I don't remember for sure.) It isn't enough to taste at all spicy, just ever so slightly warm. It's more like an extra texture there to linger at the end. The effect is rather fascinating. I can't taste it at all until the peanut butter and chocolate have melted away, and then it comes in as this pleasant little surprise. It's enough to elevate this chocolate but not too much to tip it over.

Once again, I am quite pleased with the flavor combinations. Some familiar flavors and some new angles, all the flavors fresh and kept in balance. They were all so singular in flavor (except perhaps the violet, which was the most standard of the three) that I can't even pick a favorite this time. And there is no need to try and do so: to say that they were all good is even better.
Posted by Deanna Skaggs at 1:56 PM