Kylo Ren, Darth Vader, the Dark Side, and the End of the Jedi

All of the hints about Star Wars: The Last Jedi have been implying that there will be a new attitude toward the Force. Luke thinks it's time for the Jedi to end, presumably because he sees flaws in the Jedi perspective. Snoke deliberately keeps Kylo stuck on the line between the dark and light with the idea that having both sides is what makes him more powerful. Then there's Rey in the trailer, seeing a balance between light and dark in a vision. And some of the books and Rebels address other details, as well. Ventress, for instance, uses the dark side without letting it "control her" in Dark Disciple.

With all of this, here is my concern. Star Wars has always been about dark and light and this versus that and repetition and everything of that nature. However, it is central that dark is dark. I worry that the new perspective will go too far into saying that there is no dark. Rather, that the dark is not itself negative. It's a fine line there to say that the dark side isn't negative but can simply be used in a negative way.

Maybe some people would applaud a change like this (and maybe this isn't even the direction the story is going, in which case this whole post whole just be meaningless conjecture), saying that it embraces an open mind. But those were the Emperor's words when he put down the Jedi and tempted Anakin over to the dark side. How can we (or should I say how can Luke) suddenly start backing the Emperor's perspective?

Dark is dark and light is light. If you undo this simple fact, then doesn't everything else unravel? Anakin's fall and Vader's redemption--aka. the true heart of Star Wars? 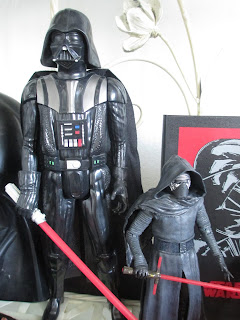 Or maybe there's another possibility. Maybe Luke is making a mistake--or maybe he made one in the past. Maybe he thinks or thought that it was possible, after all, to harness the dark side without being consumed by it. I mean, this is arguably what Kylo is trying to do (and he's a great example of why it doesn't work: he's being eaten alive from the inside because of the darkness he surrounds himself with)--maybe he learned the technique from Luke and not just Snoke. That's why Luke feels responsible and had to go seek solitude. Maybe he explains all this to Rey, and it is Rey who, like a a ray of sunshine, turns him back toward looking at the light (actually, that doesn't sound very likely--especially since Rey will probably get her own temptation toward the dark side in this film).

I mean, for Luke to say that it's time for the Jedi to end almost sounds not worth saying--do the Jedi even exist anymore? Obi-Wan and Yoda were the last Jedi, and then Luke tried to take up the remnants. But all he had was the Force, and the Jedi were about more than just the Force (there are, after all, other Force-users in the Star Wars universe). So the Jedi kind of already have ended--and maybe now Luke is just admitting that simple fact that they are moving forward rather than backward. And that's always been the case, hasn't it, even in the EU? I haven't read stories yet where Luke and Mara Jade marry and have children--but the Jedi didn't marry. Simple things like changing the Jedi lifestyle could be what Luke means about ending the Jedi.

Because if he means that the dark side isn't really dark, then either he's wrong, there is some other detail that will help explain things, or I'm going to have a hard time accepting this change of perspective.
Posted by Deanna Skaggs at 1:15 PM