I wasn't exactly excited about another Star Wars: Battlefront book. Then I saw that Inferno Squad would be written by Christie Golden, who also wrote Dark Disciple, and I thought that perhaps the book would hold some interest for me, after all.

As I'm beginning to realize and talk about, certain of the Star Wars books interest me more or less depending on where they place the focus. Books about characters and places and emotional themes are best. Books about politics and battles not so much. The first Battlefront book was very much just a wartime, army book focusing on a team making it through the fighting. This book starts off as if it's going to be similar. There are some skirmishes. Then the setting changes. 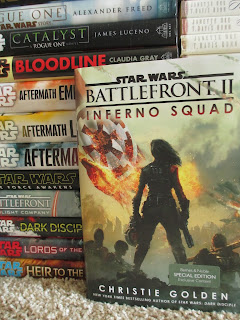 Inferno Squad takes place directly after the destruction of the first Death Star. Inferno Squad is a small Imperial group that goes undercover in a rebel group based around Saw Gerrera's ideals. Basically they've living in a cave trying to act like people they aren't--and sometimes feeling gray areas develop. Perfect. The cave living almost reminded me of The Host at times (though it's nowhere near as rustic as that), especially given that you have a close-up look at a confined group of people trying to get along with one another. And all of these questions about identity and loyalty are exactly the types of things I like to get from Star Wars--and the type of character-based content that I expected from Christie Golden.

Sometimes I don't like when stories explore the gray areas, when they try to portray villains as not being wholly evil or show that neither side is perfect. I get it, and it does usually make for interesting storytelling. But Star Wars is great because of its themes of good and evil, so you do have to be careful in what ways you explore those gray areas. Somehow, even though Inferno Squad is all about showing the perspective of Imperials who are just trying to do their duty to restore peace and order to the galaxy, it works. The reason that it works is that it's straightforward: the characters don't really waver much in their ultimate loyalty because they believe in their cause. And it works because the rebels that they're seeing up close aren't the Rebel Alliance--they're like Saw's rebels.

Here, of course, we have the welcome tie-in to Rogue One. There are plenty of references to that storyline. And we have further exploration of the rebel groups who are quicker to action (and quicker to violence) than the Alliance. You can't argue with Iden choosing to stay loyal to the Empire versus joining this group.

So, yes, there's action in here, but it's all character-based, making this one of the Star Wars books I've enjoyed more rather than less.
Posted by Deanna Skaggs at 11:18 AM