Normally I don't get into the whole "read the book before the movie comes out" thing. Either it's a book I've read or it isn't; either it's a movie I want to see or it isn't. This case, however, was different. I've been hearing of Jeannette Walls for a while, so when I saw a secondhand copy of The Glass Castle a while back, I picked it up. Then I was talking to someone recently who said she was looking forward to the movie because she had really enjoyed the book--and I thought I'd better finally get around to reading it myself. I do that: some books I read as soon as I get them and others wait for years for my attention.

Sometimes that just makes for the right timing. 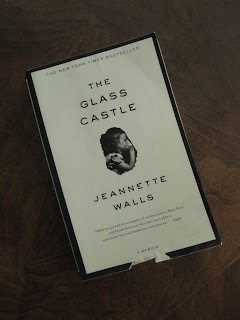 Now must have been good timing because I found that there is something in The Glass Castle that's absolutely brilliant. The quote on the front cover from People draws a comparison to Frank McCourt--but I mostly disliked Angela's Ashes so I don't know how much I agree. I think there is a more subtle sparkle within this book. Not the sparkle of goodness or the sparkle of happy memories. It's the sparkle of decision.

This book is a memoir, describing Jeannette Walls's childhood and leading up to her first adult years. There are sad things and there are happy things. There are things that a child wouldn't have seen as bad but an adult would. While the tone in which she describes events is matter of fact and therefore often neutral (you get the sense that she is mainly just trying to tell the truth of what happened and not imprint later thoughts on the past), there is a subtle change that takes place about halfway through, when Jeannette is changing from a child into a young woman.

There comes a point when she sees past the adventure and resilience that her parents speak of and sees their failings. As she realizes her parents' faults, she still holds into the resilience that they taught her. She decides that she doesn't want to live like they do--and that's a powerful decision.

Some people will relate to elements of this book. While I can't say that I do personally, I have heard stories from other people that made some of this sound familiar. So what I really found powerful was this decision that Jeannette and her siblings made to lift themselves out of the rut that their parents set up for them. It's one thing to be raised to have a positive sense of self and your self within society, but to be able to stand up above the various ways in which parents can be holding you down must really be something, something difficult and also powerful.

And it isn't from a lack of respect for or love for parents, either. This is why the matter of fact tone of this book works so well. It isn't about hatred. And it isn't even about a childlike choice to hold onto magical illusions. It's just about the truth. Jeannette's parents raised her to be smart, and for that reason she couldn't wait to make for herself a better life than they had ultimately made for her.
Posted by Deanna Skaggs at 2:54 PM