While I got the impression that everyone was more excited for the release of Phasma this past Friday, I was more excited for Leia: Princess of Alderaan by Claudia Gray. Phasma I really don't have much interest in, but a book focusing on young Leia? It's about time (and this gives me hope that someday there might be books about young Padme). The YA Star Wars books always seem to get less attention, though Claudia Gray's Lost Stars was pretty great--and she already has experience writing adult Leia in Bloodline. So it makes perfect sense that this book also went to her. 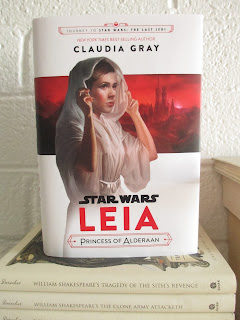 Overall, Leia a great book and highly recommended. It focuses on the time before A New Hope, before the Rebellion had fully formed, and before Leia had aligned herself with her parents' focus on defeating the Empire. That's an intriguing time to witness, especially since we'd probably all imagined that Leia was born and raised a rebel--but the truth of it had to be a little more complicated because Bail and Breha were of course working in secret and wouldn't have pulled their daughter as a child into such dangerous doings.

We also get to see quite a bit of Alderaan. We know that it's sad for Alderaan to have been destroyed, but the film shows only the destruction and even only an extremely brief moment of grief on Leia's part. We get the sense that Alderaan was a beautiful and peaceful planet, especially from that glimpse at the end of Revenge of the Sith. But that's it. So it's worth reading this book just to live in Alderaan for a while. Some scenes take place on other planets, but the main base is Alderaan. You could even say the main theme is Alderaan--which often takes on irony because all the readers know what will be the fate of Alderaan, even though Leia and the other characters can't even imagine how bad it will be.

I did have some issues with this book, however. The beginning was a little boring. I couldn't align myself with Leia's perspective because the source of her main conflict was obvious (and explainable) to the reader (though not to Leia herself); that made it all feel petty and like we were wasting time. The book did get better after that, though sometimes it returned to a certain simplicity that bothered me somewhat. I don't mind a concise plot. But at times I felt like it was overly obvious where this one was going--and I never feel that way with books. Like Kier. If Leia's falling for someone in this book, we know that either he's playing her (and he's a spy or something) or he dies in the end because of course the book can't end with them together (then we would be left wondering why he isn't around and she never mentions him a couple of years later). So Kier often felt like an obligatory plot element, as if there is some rule that YA books must involve a love story and therefore he had to be in here. I get that they were probably also trying to show that Han wasn't the first person Leia ever liked--but still.

It was great to see more of Bail and Breha, though. I feel like they are characterized so much in just the brief moments that they appear in the films. Breha, especially, only has one quick moment and then she's gone again, but you still get a sense of who she is. Like Alderaan, I liked seeing more of them and seeing how Leia's involvement with the "special politics" of her parents began.

Also wonderful? The little hints about Leia's parentage. In some ways, this is a companion book to Bloodline. Bloodline is when the galaxy finds out who Leia is, and in this book Leia's adoptive parents almost pass out from the fear that comes with realizing how close they just came to the secret getting out (and not to the galaxy but to Palpatine, which is even worse--danger rather than just disdain). The echoes of Padme in Leia were a welcome connection between the two movie trilogies.

I had almost forgotten until I'd finished the book that it's part of the Journey to Star Wars: The Last Jedi bunch. So that would imply that it contains hints about plot points in that movie. All that I can really see is Leia's identity. I think everyone has already revealed that Leia will have a much larger role in the upcoming film, so it isn't really something new to learn that there will be focus on Leia's leadership skills, her past, and her connection to the Force (which may not manifest itself in the whirling, twirling, levitating form but still helps her to get things done). But I guess seeing how Leia was raised and how, as a teenager, she brought herself into her parents' work might help us to start picturing Kylo in similar circumstances. Ben Solo was older than sixteen when he found out that his parents and his uncle/mentor had been keeping secrets from him. Leia, having been young and in the dark, should probably have realized that it would be better to put the truth out in the open than to try and shelter her son. By trying to protect him, she lost him--and maybe he'll never even have that chance to return to her and ask forgiveness.

Apparently today is 100 days until Episode VIII. 100 days until we see this last Jedi mess start to unfold. 100 days until we find out just what Leia's next move is. We've all been focusing on Rey and Luke out on their island. But the reality is, we know what they're doing (training); this was the only thing the trailer really showed because it's the only thing that's obvious already. The question perhaps should be, what is Leia doing? What is she planning? She's a person of action. She wouldn't have just sent Rey off with a "good luck" and then sat back watching holos. I'm predicting that she initiates much of the action of this next film.
Posted by Deanna Skaggs at 4:16 PM