Phasma & the Dead Planet of Parnassos

I mentioned that I was more excited for the new book on Leia than for Delilah S. Dawson's Phasma.  Phasma, as a character, has never much interested me. She's just seemed to be an over-hyped side character without any particular traits to give her extra interest. She's just a flat villain, right? So how do you make a book out of her? And why, if I have no interest in her, would I want to hear her backstory? And how can her backstory suddenly be important to tell, if it wasn't necessary to the story before? 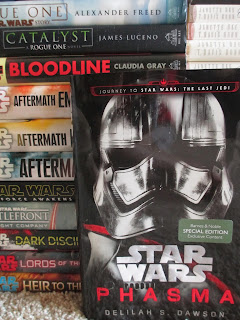 That's how I walked into this book, but you know what? Phasma ended up being a pretty good read. Phasma is the topic of the book but not exactly its central character; that distinction might only make sense after you've read the book. And most of the text is told in story-within-a-story format. So there is a sense of myth to the backstory that we hear, which does in fact go well with Phasma as an "over-hyped" character and as a figure raised up by the First Order. This format also helps lend to the theme of choice: characters have to choose what to do based on what they see, hear, and otherwise observe. Phasma made her choices, so did Siv, so did Vi, and so does Cardinal.

Naturally, I'm praising the fact that this book isn't about: "let's try and humanize Phasma and show that she isn't just a villain, she's more complicated, and here are what her motives are." As I've mentioned before, I get tired of that sort of thing because I think it lessens our sense of certain things being Wrong and it makes Right seem boring (which in fact isn't the case at all). So the way that this book is framed allows us to see Phasma as a person before she was a member of the First Order (and if you like her as a character, you can cheer for her and all that) without needing to, well, say anything about her other than the obvious: she is Phasma and Phasma has it all under control.

Now that I have that out of the way, I'd also like to point out how much I enjoyed Dawson's writing. There gets to be a certain style to book like this; they're all kind of written in the same voice because they're first Star Wars books and then Chuck Wendig or Timothy Zahn books--and what each author contributes is usually separate from the writing style (their way of writing characters, or action scenes, or political content, etc.). But the writing in this book felt different. The sentences flow in a less blocky pattern and in a more expressive way than the standard form.

The content, also, was a little different. Almost like how Ahsoka gave us a different setting, so did Phasma. So much of the book is spent on Parnassos, trekking across the desert. We see hunter/gatherer/warrior communities, an unforgiving climate, acid rain, desperate medical practices. It all reminded me at times of The 100. The feel, also, was sometimes more like an adventure story; not that the characters were out on an adventure, but they were so stranded from everything that their goal often felt displaced from their current surroundings. I say all of this as compliments: it was exciting territory to cover (well, except for the gladiator-esque bit in the middle--I guess I can never find content like that exciting).

And since this book is part of the Journey to Star Wars: The Last Jedi, are there hints about the upcoming movie? The obvious hint is that Phasma might become a bigger part of the story now, and that's why it was important to learn more about her right now. But they were also teasing us to ridiculously. A child named Frey? Really? That's way too close to Rey's name. And then there was Siv's unborn child, as well. It was impossible to not try and imagine one of these two girls being Rey--even though logic said that neither of them could be. But still, they were teasing us on purpose about Rey's identity. Her identity can't not matter if they keep teasing like this.

There are some references to Snoke and Kylo Ren, as well, and of course Armitage Hux plays a role in here, especially towards the end. But we don't find out anything new about any of them, just about Phasma's possible thoughts/feelings toward the lot of them--which could matter, though I don't know in what way. And then there is the whole frame story of Vi and Cardinal. Did they remind anyone else of Rey and Kylo? Just a tiny bit. That image of them stuck together in a torture chamber, part of him not acting as the usual torturer and her in some way taking over the situation--and of there being a sense that they will, well, be around each other in the future, in one way or another. Anyone? Everything in Star Wars being intentional (and reputation also being a usual plot device), I get the sense that this reflection was indeed on purpose.

Do you like how I turn everything, even a book about Phasma, back to Kylo and Rey? Well, you talk about what interests you most. And I guess Phasma interested me most for the planet on which it took place and for the extra thoughts about which it made me try and theorize.
Posted by Deanna Skaggs at 5:50 PM