Well, you know, Romeo and Juliet wouldn't exactly have been a play I would want to rush out and see, except that I do like to keep an eye on most of Southwest Shakespeare Company's productions. You just never know which ones will click with you and resonate in a powerful way.

Romeo and Juliet (directed here by Patrick Walsh) began and I thought I was seeing things that I expected. The prologue, the two families, and the comedy. But then something happened. I want to say it was around Mercutio's Queen Mab speech that I noticed this production was taking a different angle. That speech is dirty even for Shakespeare--I remember finding it dirty in high school even though I probably didn't even realize then just how dirty (why, again, tell me, is Romeo and Juliet the main required Shakespeare text [even though there are other Shakespeare plays out there] in high schools, even when sleeveless shirts or shorts that don't come down to your knees are considered too inappropriate for school? I digress). That speech is usually just played as comedy, but here it became a frenzied bit, where Mercutio starts entering his own zone, which made the scene fall in an entirely different way from what I am used to seeing. 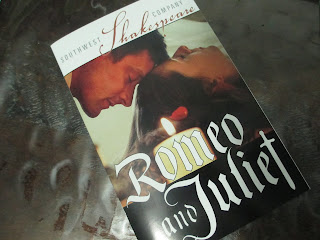 That concept of actors entering a zone reminded me of Hamlet last January.

And then I thought more of Hamlet as the play continued to unfold, greatly slimmed down. As I continually mention, I prefer Shakespeare's tragedies to his comedies. And though Romeo and Juliet is a tragedy, it's still full of all of the comedy that I generally dislike. This production cut most of that away, leaving us with the core love story. Romeo and Juliet a love story again, a story where you can genuinely feel these two characters falling in love? Wow, that's impressive simply given how familiar this storyline is. It all had so much to do with the performances of Sasha Wilson as Juliet and Kyle Sorrell as Romeo. They did that thing of making the audience believe what we were seeing on stage, of entirely bringing us in.

Some versions of this play emphasize the youth of the two characters. This one didn't. Their age was mostly irrelevant. Their doomed love was central.

Maybe also watching this play brought all of the emotions of falling in love because of the music. Ben Vining provided live cello music. The cello is already one of those instruments that speaks with a human voice, and the way that the music was mainly subtle and yet always just perfect for the moment established the emotional tone. Cello music can be tender and it can be heartbreaking--like love.

Romeo and Juliet runs through this Saturday. And it's exactly the type of production I like to see from Southwest Shakespeare.
Posted by Deanna Skaggs at 9:17 PM