Likely this ought to have been one of the first items I reviewed from the Chiles and Chocolate Festival at the Desert Botanical Garden a couple of months ago. But then again, hot chocolate is one of those things that you like to keep for a while so that you can try it again multiple times before making comments. This hot chocolate isn't like others: it's made in Oaxaca in small batches as part of a family tradition. So it's similar to the Mexican hot chocolate (Abuelita or Ibarra) that you can buy at any store--just much, much better. 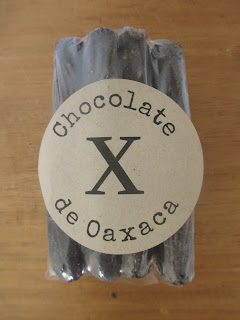 I prefer Abuelita chocolate to Swiss Miss, sure; this one from Xocolatl, though, I prefer to nearly all of the hot chocolates I've had (I'm just using "hot chocolate" as a general, umbrella term today). And it's no wonder. The cocoa beans used in this chocolate are grown in Chiapas, Mexico, which is in itself less common; I don't come across much Mexican-grown cocoa. The only other ingredients are cane sugar, cinnamon, and almonds. No fluff, no fuss, no fillers, no junk. 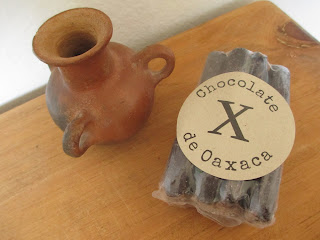 Instead of coming in the familiar round discs, this chocolate comes in sticks. There are three sticks attached to one another and four of these sets of three in the bag that I bought. So that's twelve dollars for twelve sticks; expensive only compared to the price of cheap hot chocolate, but completely reasonable otherwise. My only complaint about this chocolate is in that stick style. I like hearing about how the chocolate is hand rolled into sticks, but I don't like trying to break off just one stick. If any of you buy Abuelita of Ibarra, you'll know that when you have trouble breaking a piece off of a disc, you just stick a knife into it and presto, it becomes easy to break. Not so here. Even using a knife, I usually can't break off just one stick, so I end up having to use two half sticks or something like that to get the right amount. Maybe if you're making more than one serving, you won't have as much of an issue with this. 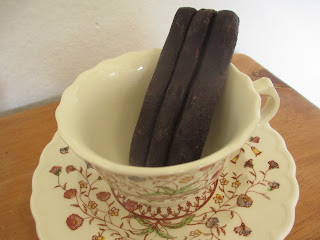 The proportions are one stick per cup of milk (almond in my case). Most often, I end up using half of what a hot chocolate label recommends. To my surprise, then, I found that this proportion was exactly right--so much so that I haven't even been inclined to try adding less chocolate per cup, even just to experiment. I did choose the 60% cacao instead of the 70%; I don't normally like my hot chocolate to be too dark. I leave that for the chocolate bars. So maybe this lower percentage is also why I was happy with the full amount. I heated the chocolate in my usual method: in a small saucepan, with a whisk to mix it all in. I did find that this chocolate was much easier to froth than Abuelita and Ibarra are--which was exciting. 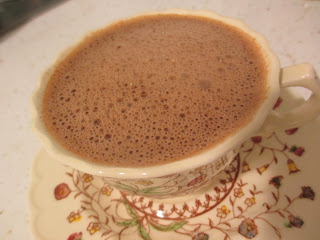 The only explanation I really want to give about the flavor is that it's exactly right, for me at least. There is rich chocolate flavor, but it isn't overwhelming. There is sweetness, but not a huge amount. I can taste a little cinnamon, but mostly I don't notice it (maybe also because I always add cinnamon to hot chocolate, so maybe it's just a neutral flavor to me). And the almonds are stronger than what I would expect (considering that they're not mentioned as a flavor, just in the ingredients list). They make the chocolate taste very Old World. I can almost taste rose and orange right along with the almond just because my mind is associating the flavor with all of those historical drinking chocolates they have at Kakawa Chocolate House in Santa Fe. No, this isn't flavored chocolate--and I might be making the almond taste sound stronger than it is. What I mean to say that the flavors here are textured, simultaneously simple and complex. That's traditional, isn't it? Food that is approachable and recognizable--and wonderful.

I highly recommend this chocolate, if you ever see it around (well, they do sell it online, as well). This is hot chocolate.
Posted by Deanna Skaggs at 9:09 PM