Not that I ever take good pictures at Out of Africa, but sometimes I do like to share them because the content is good. I go there pretty regularly, so often I think I'll just wait and make a compilation post from different trips. That never seems to happen, though--so here I have some pictures from when I was there earlier this week.

Jericho the rhino is elusive. Yet I caught sight of him last time I was there, and this time he was also out and about, napping in the sunshine. A true dinosaur if ever I saw one. 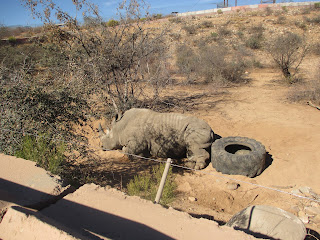 These ladies are usually napping, too. Normally, though, they're underneath their shaded patio. On this day, they were out in the sun, too, fully stretched out on their backs. The ultimate poses of contentment, eh? 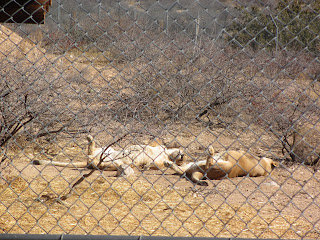 Kumba (the lioness) and Chalet (the white tiger) were also at rest (Do you sense a trend here? The day was so beautiful that all of the animals were really taking advantage of the weather.). Chalet is the star of Tiger Splash; you have a good chance of seeing her there if you go on a busy day or a weekend. She does such wonderful jumps into the water to catch the toys. When she leaves, though, Kumba cries for her--and everyone walking by assures her that her friend Chalet will be back soon, like she always is. It's adorable. 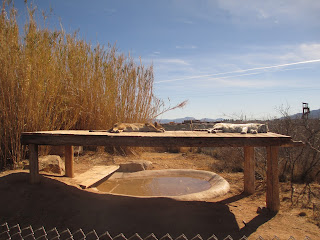 Even Fisher was out, smiling in the light. 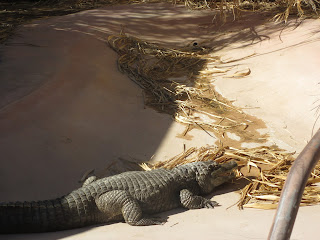 Since it was a Monday (aka. an off-day), Tiger Splash was a little different. It was only young Zarah's fourth time being in the show, so they were mainly just getting her used to the arena and the pool and the toys and the audience. As someone who has seen Chalet's wonderful jumps many times and also the other tigers many times (they all have their different personalities and preferences, which makes the show different each time and for each tiger), it was great to have a chance to see something entirely new--and to see Zarah at these early stages. She's working up to be a little star herself. 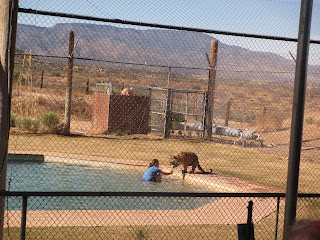 Normally I only take one or two pictures during Tiger Splash, but baby Zarah got several more. Here she is jumping up for a toy: 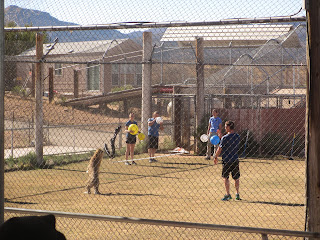 And here she is in a mild game that will probably lead in to the full tug-of-war later. 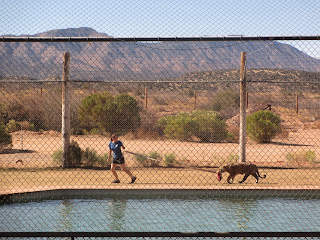 Jeff gave her a bottle at the end of the show. There isn't much cuter than seeing a (big) little tiger drinking from a bottle. 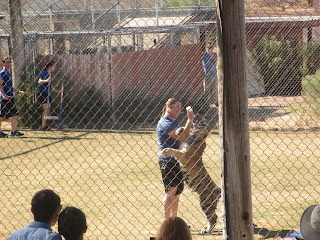 And speaking of cute, isn't this landscape shot cute, too? Do you see what I see? 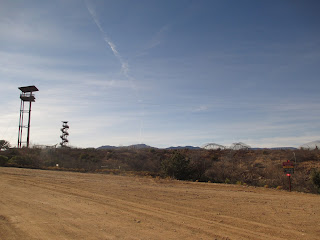 How about now? Think golden. 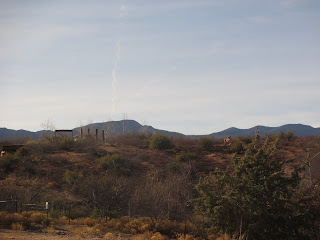 Now you see it, right? 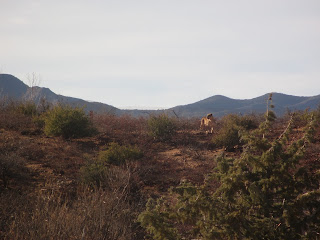 There she is, a lovely lioness blending in with the landscape. This is why you never know, when you're out hiking, if a mountain lion might be watching you. Don't worry, though, they're probably just minding their own business and have zero interest in approaching you. 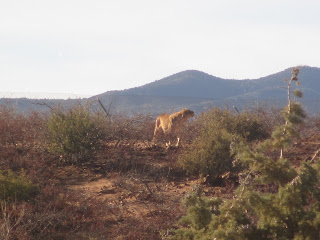 And I must include at the end the picture I've already shared elsewhere, in which I am representing for the dear Pangaea: Land of the Dinosaurs whilst visiting with Pilgrim. Kibo came to his side of the fence to say hi on the way in, and Pilgrim came over to say bye on the way out. They make for wonderful greeters. 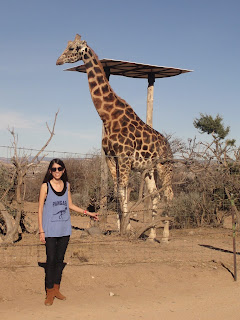 Posted by Deanna Skaggs at 2:42 PM