Well, well, there I was thinking I would read more C.S. Lewis--at a steady pace of about one new book a year. I believe, though, it has been quite a while since I last picked up one of his books. This time I decided to go with what felt would be a core Lewis read, Mere Christianity. 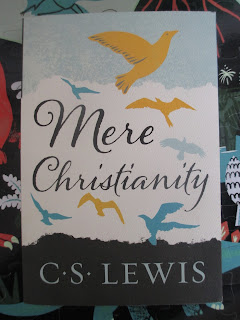 What I didn't know was that this book was originally a series of talks on the radio during WWII; the BBC asked Lewis to speak on Christianity during that difficult time. So the title of "mere" refers to the fact that Lewis, here, aims to describe Christianity in its most basic context--that is, in the things that apply apart from everyone's individual religious subdivisions and interpretations and such.

So while certain parts of the beginning of The Problem of Pain, for instance, were a little more challenging perhaps to read and follow or wrap your head around, Mere Christianity is very easy to read. Being originally a radio talk (and being C.S. Lewis), the tone is simple and approachable even when he is describing abstract and large ideas.

And his audience? A bit of both sides. Part of what he does here is correct certain incorrect concepts about what Christianity is--many impressions of which still exist even all these decades later. So all of that is especially helpful for any non-Christian readers. But Lewis also gives reminders to Christians. There are certain things that we might either forget or ignore or maybe even some things that we haven't quite realized before that he reminds us of. He talks about beliefs and about how those beliefs then affect behavior. All of this makes me think of something that I think people tend to forget: when people talk about certain guidelines for life/behavior that are in the Bible, they tend to ignore the fact that those are guidelines for Christians. Like if someone doesn't eat a certain food for their religion--you won't expect other people to not eat that food as well or for that person to be surprised that other people eat that food. A Christian lifestyle just means that people, who have already accepted to follow Christ, have decided that there are certain guidelines for living that they would personally like to follow. The belief comes first; then the lifestyle starts to follow. It isn't the other way around. Anyways.

Overall, Lewis does a good job here of getting to the core of things, even of certain things that we would might like to forget. So definitely a good read, from whichever side of things you're coming. Also a nice starting place if you've mainly read Lewis's fiction and want to move on to his other writings. All of his talk about shadows or mere glimmers of things to come is, of course, very reminiscent of what he talks about in The Last Battle (the last book in The Chronicles of Narnia). We are in the Shadowlands and "there are no ordinary people. You have never talked to a mere mortal" (Lewis The Weight of Glory). We were all created to be immortal. How's that to give you a heart for people, eh?
Posted by Deanna Skaggs at 9:16 AM