Well, well, one year after moving back into the greater Phoenix area, I've turned into quite the Arizona Opera regular, haven't I? That is, hopefully I'll be able to finish with Das Rheingold in April and maybe The Barber of Seville in March. This month it was Candide, which I had read was more like a musical than a usual opera. So definitely a little different. 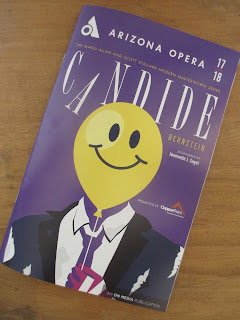 They also used this opportunity to try out something different with the stage. Instead of having the usual physical sets, there were projections on the backdrop, the side walls (sorry, what are they called?), the floor, and sometimes also around the middle of the stage. For most other shows, I would feel like something was missing with not actually having physical sets. But this was the perfect show to try out this method. Candide is a kooky, weird, random, comedic bundle--and the kaleidoscope of projections fit it perfectly. Cityscapes gave the view the look almost of a live-action/animated film, the forest made for a beautiful backdrop to Candide's somber songs of solitude, and the scenes with the ships and the hot air balloon (that would have just looked silly if the tone were serious) looked hilarious and cool in a positive sense.

The music? I don't really know. Because the instrumental portions sounded much like a film score, it was once again great to hear the Phoenix Symphony playing all of this music live. The songs were different from opera, yes, but also sometimes similar. As I somewhat alluded to, Candide's lonesome songs were quite pretty, breaks from all the, ah, stuff that goes on throughout this show. And Katrina Galka, I've said positive things about her in the past (actually I think it was partly because I knew she would be in Candide that I decided I did want to go see this one). She really stole the show with "Glitter and Be Gay," when Cunegonde is showering herself in jewels to try and cheer herself up. That piece alone made the whole show worth it. She has power, both to sing and to express. You could tell, too, that the entire audience was captivated by her performance there (you've gotta love an opera audience: they are entirely honest and will clap loudly when they're pleased and only quietly and politely when they're neutral--oh, and another side note, you know how with any other show if one person does a standing ovation at the end then the rest of the audience stands up, too, even the person sitting next to you who couldn't stop yawning just because they're all sheep? opera audiences don't do that; each person only stands if they feel led to stand to express their honest appreciation. I like that).

The plot? Now I have no idea what I think. I got the idea that this show was going to have a couple racy moments, and it did, though honestly not much (then again, not much seems that racy to me even years after that one Greek plays class I took in college). I just share this because there was a big group of students that attended this production, and as we were all walking out I heard a couple of them talking about all of this. You know, the awkwardness of sitting next to someone else's parent during those scenes and hearing their teacher express apology about not realizing that that content would be in there (that's the surprising part: didn't he/she look up the show at all before planning to take the class?). It was just kind of funny, not the type of conversation you usually hear while walking out of the opera.

Anyways, back to the plot. Even with reading the synopsis before each act, I had a hard time keeping up. There are so many characters and places and everyone brutally dies and then randomly shows up again in some other setting that I eventually just gave up on trying to keep up and settled on watching each moment instead. The gist of it is that this group of young people have a teacher who tells them his philosophy in life, which is that everything in the world is for the best. Basically everything has a reason and nothing is bad. But then everything that happens to everyone in the story is worse than bad. War and natural disasters and rape (another side note: there would not be so much about rape, including jokes about it, if this show were written today; that part really started to get annoying by the end) and hangings and shipwrecks. It's all terrible--but it's all treated in that same kooky, comedic tone so that it's all comedic rather than tragic. When the crowd is all excited to hang Pangloss, for instance, (and I really have no idea who the crowd was or why they wanted to hang him) you want to step back because, well, hanging someone just because you want to is horrible, and yet they were acting out the scene so silly that it was funny. The board chair, John Johnson, said it himself in his message in the program: Candide is entertainment. Whatever else it is or isn't, it's entertaining.

The theme did feel a bit depressing towards the end there, when all of the characters are broken and feel like nothing was worth what it cost them and nothing in the world occurred as promised. There was definitely a moment of despondency there after all of the comedy. And yet everything did wrap up with a final message of, in a sense, saying that yes, you do need to simplify your view. Nothing in this world will be perfect and therefore you need to ground yourself in something real and solid and simple. No palace of jewels, Cunegonde, just a little farm. No gold and status. Candide, just a little farm. No perfect people, just Cunegonde and Candide.

So while I can't say that this was my favorite show that I've ever seen, it did give me an evening's entertainment and also more to think about afterwards. And I'm fine with that: when a company has a whole season of shows, they have the opportunity to do different thing with each show. You don't necessarily want them all to be Madama Butterfly and Tosca.

Posted by Deanna Skaggs at 3:55 PM