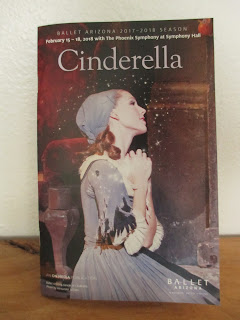 Last spring, Arizona Opera put on their production of Rossini's Cinderella, and now this February, Ballet Arizona performed Prokofiev's Cinderella. So an opera version of the story one year and a ballet version the next year. This time there was more of a touch of fantasy and less of that socio-political angle--of course this would make sense given that there could be no dialogue in the ballet, just visuals. When the scene opened on Cinderella in her "rags," I did have a feeling of deja vu, as if it hadn't been nearly a year since I'd last watched this character on the Symphony Hall stage, but that quickly dissipated as we launched into an entirely different type of production, complete with the usual high production standards.

Our story, then, was of nature drawing like to like. Cinderella, through her grace, drew the attention of the fairy godmother and then of the prince. Her stepsisters, on the other hand, scared everyone away and drew only disdain with their wiling and presumptuous attitudes.

And the stepsisters, my goodness, they were definitely an audience favorite. The stepsisters aren't supposed to have social graces, which would mean that they don't dance well--but here we had talented dancers portraying poor dancing. Quite an art there. They weren't just dancing; they were truly acting, with such great physical comedy. They were the element of levity in a story that, while a fantasy, is also quite serious.

Now "Someday My Prince Will Come" from Snow White and "So This Is Love" from Cinderella are going through my head simultaneously. Valentine's Day month really is hanging on forever, isn't it?
Posted by Deanna Skaggs at 6:49 PM