As I mentioned last week, I went over to the Art of Chocolate A'Fair in Gilbert earlier this month just to see what they had going on. Their featured chocolatier was Elixir Chocolates from Albuquerque, New Mexico. While I don't know what it meant for them to be the featured chocolatier, I did want to try out some of Elixir's chocolates. They are a confection company, so among their products are also things like toffee and brittle. You can already get that sense from the style of the white box here. 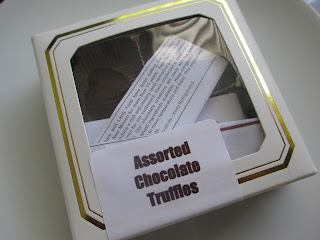 For a confection company, though, these chocolates have style. (Not saying that confections don't have style--but they usually have more of that handmade, plainer sort of look, if you know what I mean.) The shapes and designs are varied and many of them have those patterns or pictures on top, which is something I usually see more on straight truffles rather than confections. 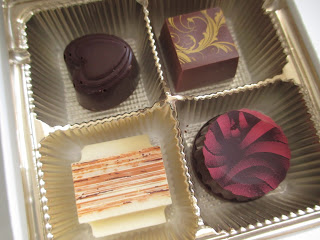 Hazelnut Latte - I went for dark, milk, and white options. So the first here is a dark chocolate heart; inside of it you can see that there were white/black layers for a cream and chocolate look. The flavor is exactly that: cream and chocolate and coffee. What must be the hazelnut comes across more like coconut to me for some reason. I wouldn't say that this chocolate reminds me exactly of a hazelnut latte; more it makes me think of a cream-filled chocolate donut. The chocolate is the sweet kind of dark chocolate. Decidedly a confection, then. 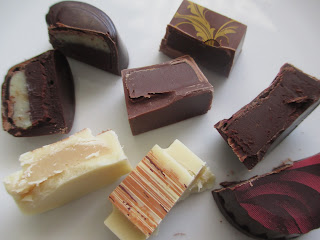 Chai Tea - Moving on down to the milk chocolate, we have a square with a golden pattern on it. You can taste the chai spices here instantly, ginger especially with a little cinnamon. It's a nice little zing of flavor but nothing terribly exciting. 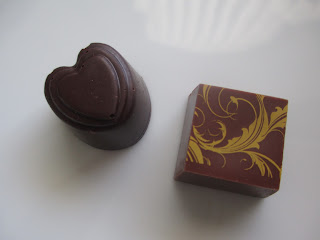 White Chocolate Irish Cream - Obviously, this one is the one with the cool boxy shape. A little Irish Cream hit comes first in the flavor, then that creamy, kind of chalky taste of the white chocolate. I'm enjoying it simply because I've been enjoying white chocolate lately. Also, though, I don't tend to find a flavor like Irish Cream added to white chocolate and in fact the combo works well: the two sweeter kind of flavors make for a good match. 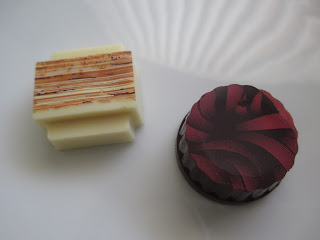 Mexican Chocolate - "Dark Chocolate, Red Chili, Cinnamon & Almond" - I didn't see the description when I chose this little red circle; I didn't realize, then, that it's a spicy chocolate, which, as you know, I don't usually favor. I was just thinking cinnamon, not chili. Yet it turned out to be the most interesting of the four. It begins with a nice fudge flavor. Then you get a cinnamon flavor that is specifically of cinnamon candy; this flavor is strong and spicy. The cinnamon next builds into more of a chili spice; I may possibly have picked up some almond towards the end. While I may still not be the biggest fan of chocolate burning me and white I do find it a little odd that the cinnamon tasted like candy, I am a fan of how all of these flavors came together. The sweetness perfectly combines with the spices to bring out the flavors rather than burning. And that's more of the idea of spiced chocolate versus spicy chocolate anyways, right? I wonder if, given that Elixir is based out of New Mexico, this might even be something of their signature chocolate. It could be: it's unique enough and its flavor profile fits well into the Southwest. 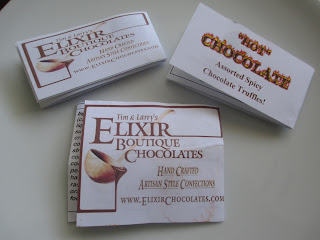 In general, I prefer chocolate products to be either fully in the truffle zone or the confection zone rather than in this in-between truffle/confection space. In general, chocolates like this leave me wanting something more. But with that being said, most of these were nice and the Mexican Chocolate did offer something unique. So I certainly prefer these to mass-produced, grocery store chocolates. I probably wouldn't go out of my way to get more from Elixir, though.
Posted by Deanna Skaggs at 10:47 AM