The first time I went to Kakawa Chocolate House, I was enchanted and amazed and excited. This was the time when I was reading chocolate reviews and starting to write my own. In fact, some of my first reviews on Chocablog.com were of chocolate bars that I got at Kakawa Chocolate House. This was the time when the world of chocolate was new and fascinating to me. I remember sitting in there and chatting with the shopkeeper and trying a cacao bean for the first time. That was eight years ago. 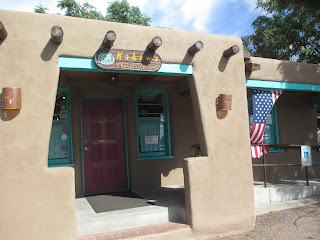 The second time I went to Kakawa Chocolate House was just a couple of weeks ago. Everything was the same and everything was different. I went by myself this time, walking from the Plaza area (it's about a five to ten minute walk, depending on where you start and how fast you walk). I'd just been to the Georgia O'Keefe Museum, so I was feeling inspired. And the warm afternoon was just starting to cool off from the highest point. Like a traveler approaching a house of hospitality, I reached the small, brown, adobe-style building. From the outside, it seemed mostly unchanged, and it is rather inconspicuous, as most everything in Santa Fe is. Businesses work off of reputation rather than flashy signs. By the way, Kakawa's logo, if you weren't already aware, is the Mayan symbol for chocolate. 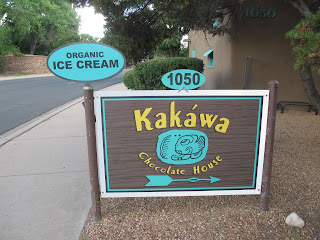 So let me start from the beginning. Kakawa Chocolate House is basically a coffee shop for chocolate. Their main product is their drinking elixirs, which are nothing like hot chocolate and well worth the time. They also have a case full of chocolates and truffles and another filled with chocolate bars from various fine names, such as Pralus and Michel Cluizel (some of my favorites, which I tried for the first time from here). There were a few new things this time. They now serve their own ice cream, which I probably should have tried, but it was a short trip, so I couldn't work in too many desserts. They also make horchata, chocolate soda, iced mocha, black tea, and lemonade. Enough options for everyone and yet they all sound good. 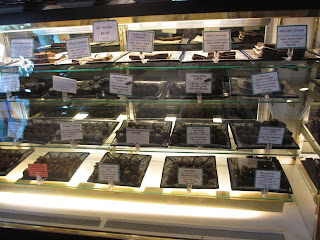 The shop is set up like a coffee shop, too. There are tables and chairs to sit at after you order at the counter. When you walk in, the staff greets you and explains the drinking chocolates to you. (Side note: instead of the one shopkeeper that was there eight years ago, there were three people this time and the shop had quite a few customers.) They'll let you try samples of as many of the elixir flavors as you want; I only tried the European ones, though, because all of the Meso-American ones have coconut and I don't care for coconut. Their flavors have changed quite a bit from what I remember. Instead of Chili, they had the Aztec Warrior. And many of the flavors used to come with dates; I chose the 1692 French, for instance. That gave a welcome sense of the history of chocolate. 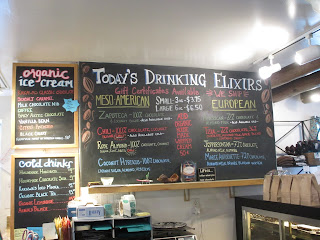 Some of that still lingers, such as in the Jeffersonian and Marie Antoinette, which both evoke obvious time periods and places. And I believe I did see some of the old flavors available to purchase in bags that you can buy to make at home.

The Jeffersonian tasted quite nice, but I chose the Tzul to buy. A small cup is 3 oz. and $3.75 (up 25 cents in eight years), and a large cup is 6 oz. and $6.50. Get a small. While there may be a few people who would want a large, most people will be completely satisfied and probably more satisfied with the small. It's exactly the right amount. 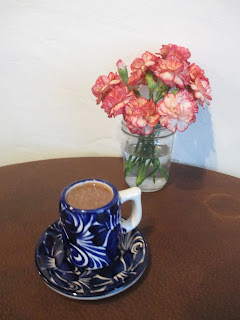 The chocolate comes in these wonderful white and blue cups. These cups are also for sale if you just can't resist. I do think I might have to get some someday when I have a little more space. Elegant and rustic at the same time, just like Santa Fe--and just like chocolate, too, honestly.

Let me try and describe the texture to you. This chocolate is thick, yes, certainly thicker than grocery store hot chocolates. But not so thick as melted chocolate, nor so thick as to feel partly solid. Just thick enough to have some substance to it. And the thing is, I remembered it being good, but when I sipped some again after eight years, I thought to myself that it was so much better than I remembered. Depending on what flavor you get, it's rich and dark with flavors of sweetness; it is serious but not overpowering. A word of advice: don't be shy about asking to taste samples. They mean it when they say you can taste them all; you don't have to taste them all, but you should make sure that you're getting the right flavor for you. We all have such different tastes, so you want to be sure that you're making the best choice so that you'll enjoy it. 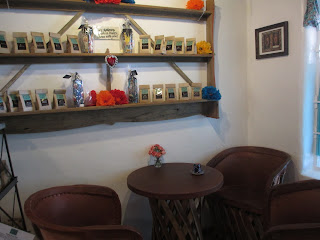 The Tzul was an interesting combination of earthiness and femininity. The board describes it as containing 72% chocolate, 36% chocolate, almond milk, and a spice blend. To me, it tasted somewhat of orange. Also of nuts, perhaps almonds (that would be the almond milk). Maybe something like nutmeg. It's an almost sweet drink and it is also mildly dark. It's something you sip quietly and something that makes you feel enriched as you drink it. I was getting pressed for time when I sat down with my cup, so I had just enough time to finish the small cup at my own pace before I needed to leave (this was the afternoon before the Flamenco show at El Farol). 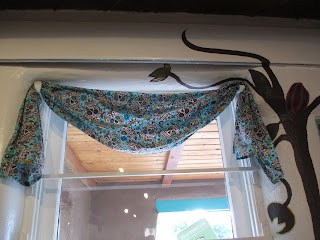 And it was just a very pleasant way to finish off my afternoon. Kakawa Chocolate House is the perfect stop for visitors and locals alike, a place you can go to get a quick drink or chocolate or somewhere that you can sit for a while with conversation and drinking chocolate. While I was there, I also picked up two chocolate bars and two truffles. I'll review the truffles next. 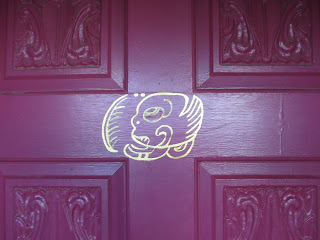 Posted by Deanna Skaggs at 9:05 PM