Now that I've finished going through all the truffles I brought back from Santa Fe, I'm starting in on the chocolate bars. First up is a flavored one from the gift shop at El Rancho de las Golondrinas, which is a great spot on the outskirts of Santa Fe for a visit. This chocolate, however, is not made in Santa Fe; it is from the nearby Albuquerque. Given that I usually don't spend any time in Albuquerque and therefore have not bothered to look up chocolate shops there, I hadn't heard of Joliesse Chocolates before. But this chocolate passed the ingredients test (no to fillers or artificial junk, yes to real cream and vanilla), which usually bodes well. 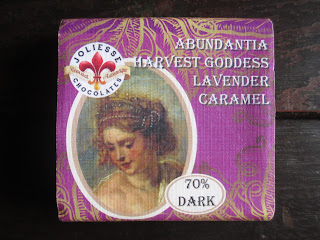 The gift shop, presumably, chose to carry this particular chocolate because of the lavender. Not only is lavender very Santa Fe, but the ranch also has a lavender festival each year. So it is fitting. But after the wonderful lavender caramel truffle from Chocolate + Cashmere, would this one still satisfy?

It turns out, naturally, that this is a very different experience. It's more casual and straightforward and the lavender flavor is a bit different, as well.

Abuntantia, the back of the wrapper tells me, is the goddess of the harvest and plenty (cuisine, essentially), with lavender being an important part of cuisine since Roman times. It is a pretty wrapper, with Abundantia's image and a purple background. The chocolate bar is pretty, too, though it had some bloom to it. Again, I can't say if this formed after I purchased the chocolate or after; but as it's merely aesthetic, it isn't a big deal either way. 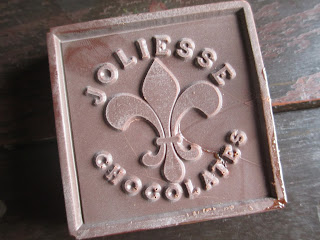 I'm not sure if you can tell from pictures, but this is quite a thick bar, probably double or so the thickness of a regular chocolate bar. It's also square in shape. The overall feel makes it seem quite solid and big, though it's a standard 60 grams. Once again, a possible product of time spent traveling: there as some caramel already leaking out of the chocolate when I unwrapped it.

As soon as you bite into the chocolate, the lavender strikes you. It's the fruity and citrusy type of lavender, rather like a Lavender Earl Grey tea. I perhaps prefer the more floral lavender flavor of the aforementioned truffles, but that could be a personal preference.

While the lavender is quite a strong flavor, you do get to taste the chocolate as well because you have two thick layers of it, top and bottom with the caramel in the middle. This must be the reason, after all, why the chocolate is so thick. This is a fairly standard decent dark chocolate (it's a 70% cocoa content). No flavor notes, really, nor either bitterness or sweetness. Just chocolate flavor. I'd compare it to Ghirardelli.

It's a good chocolate but not a "wow" chocolate. The right thing to pick up and eat right away, as fits in best at the gift shop where I found it. It would be nice for sharing, if the caramel didn't make it messy. So you'll just have to get one all to yourself. It is a little pricey at $6.50, especially if you're not sharing. But you know what, the chocolate is good quality and so is the caramel, and there's a price for all that--and this is a fairly big bar of chocolate.
Posted by Deanna Skaggs at 3:56 PM