The Aftermath Picks Up the Pace

Click here to read my thoughts on the first installment in the Aftermath trilogy.

Last fall we had many books released as part of the Journey to the Force Awakens campaign, including Chuck Wendig's Aftermath. While the campaign was exciting, that book was hard for many of us to get into, due in some part to the extensive Interludes showing lots of characters and lots of settings without necessarily uniting it all. And it didn't deliver as much of a prelude to Episode VII as I had hoped for. 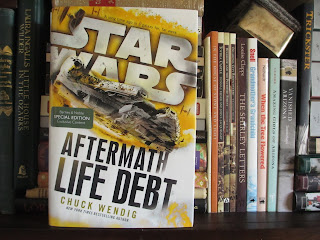 With that said, I wasn't overly excited for the sequel, Aftermath: Life Debt. But it was hard to not enjoy seeing the Millennium Falcon on the cover. So. I got the book and even put another one I was reading on hold in order to read this one right away.

The thing is, there have been so many scattered things going on in my life right now that I just didn't have much time to read. So it's taken me over a month to get through this book. But do you know what? That may have been a good thing because this book was good and it helped to have time to absorb it all better.

I see now that Aftermath wasn't Chuck Wendig's fault: that book's fault was a matter of holding back for later. Life Debt delivered all that its predecessor didn't; if you're hesitating on whether or not to read it, definitely read it. By the time I got to this book, I was getting used to the team introduced in Aftermath and I was starting to like them and their dynamics; the way that they come together isn't entirely unlike the crew in Star Wars: Rebels. I started to care about them, so I was finally interested in what was happening to them. And while Mister Bones seemed so random and weird and I just didn't get him in the first book, I really like him now: he's hilarious and cool at the same time.

While there were still Interludes in Life Debt, there were not nearly as many as before and they also weren't as random. They were connected more to the main events, although not necessarily in obvious ways at first. The Interludes made more sense this time and felt like parts of the story instead of distractions from it.

Ah, yes, and then there are the familiar characters. Leia, Han Solo, and Chewbacca--and Mon Mothma and General Ackbar, in addition to Wedge Antilles from the first book. They're not just on the sidelines, either; they're a big part of the story, especially the second half. That's both welcome as far as enjoyment and insightful as far as hints of what's to come.

Now for some semi-spoilers below the break.
The most interesting hint of what's to come centers around Ben Solo. Of course, this couldn't appear until the second book because the first one came out before Episode VII, before we knew who he became. Leia is pregnant during Life Debt and she gets some sense, through the Force, of who her son will be. Not the worst of it, just things about his personality. That's insightful as to what drives his character and it's also maddening because I really want to see what happened in his childhood and adulthood that drove him to Snoke and the First Order and that red lightsaber.

By this point, I knew that Temmin would grow up to be Snap Wexley, pilot in service of the Resistance, who does appear in Episode VII. On a more mysterious note, it didn't escape my notice this time that Grand Admiral Rae Sloane's first name sounds much like Rey of The Force Awakens. Now, I know that the general idea is that Rey took her name from a helmet she found that once belonged to Captain Dosmit Raeh, but is it coincidence that we once again find that name, with yet another spelling? Is there some connection between Rae and Rey? Or is this just another way of cementing the idea that Rey stole her name?

We get some talk of Jakku in this book. We learn that Gallius Rax is from Jakku, that he is orchestrating events throughout the galaxy, and that he is bringing the hidden remnants of the Empire to hide out in Jakku. Presumably this is what will lead to the space battle over Jakku (if it had a name, I've forgotten what it's called). But what does it mean that Rax is from Jakku, what are his plans, and why did the Emperor choose him and for what purpose?

I haven't read anything on other people's thoughts, but it seemed plain to me as I was reading that Rax will become Snoke. Maybe I'm wrong, but is there really any other possibility? Now, what interested me greatly was what he said to the Emperor at the end of the book. He said, "I want a new life. I don't want to be me anymore" (430). I don't want to be me anymore. Maybe it's all of the theories about reincarnation that have skewed my view of this quote, but it sounds a lot like the Emperor plans for him to have a new identity. It could simply be in the sense of Anakin Skywalker ceased to be and became instead Darth Vader. But could it also be that the Emperor is using Snoke to bring himself back to life? I don't really buy it--even though I'm the one who brought it up. But there is something odd going on here, something we haven't seen before.