Much or Not Much Aftermath?

I had absolutely no idea what to expect from Chuck Wendig's Aftermath. Remember, I don't read book summaries/back covers/book jackets of books that I'm already planning to read. So I had no idea who the characters were going to be, what the plot would be, or even what the timeline would be.

And you know what? I feel like I still don't know much about Aftermath even after reading it. 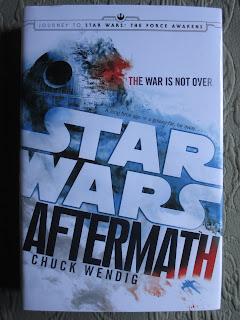 When I was, oh, around halfway through or so, I called the book "scatter-brained." If you've read it, you know what I mean. While the basic plot follows a small handful of characters, jumping back and forth between perspectives and sides, there are also "Interludes" between chapters that take you to separate planets, characters, and scenes. These Interludes are basically showing what is going on in the rest of the galaxy in very brief glimpses that barely give you time to remember a completely new set of characters, only to have that new set of characters disappear again after two pages. They're the type of glimpses that would maybe work better in a movie than a book: it would be easier to see these quick scenes play out than to have to follow them while reading.

What's even odder is that, for all these little scenes added in to give relevancy to the main story, this book felt rather irrelevant. Yes, most of the focus is on characters we've never met before, but I don't think that's the problem: a book gives enough time to develop new characters and get the readers to care about them. I think by the end of the book, I did care . . . enough about these characters. But the story just felt like it was hanging in space, detached from everything rather than conveying everything.

I complain also because this book was so highly marketed, more than the other Star Wars books I've read so far. It's part of the "Journey to the Force Awakens." It's supposed to show what happened after the destruction of the Death Star and lead us in to Episode VII. Maybe it did that--but it's hard to tell what it did right now. Like I said, it's like this book is floating right now without anchor; after all, it is the first book of a trilogy and perhaps after we've seen Episode VII and the rest of this book trilogy comes out, we'll have more context.

Right now, it's like this book was just 370 pages devoted to saying that the destruction of the Death Star didn't mean the immediate death of the Empire and that there was still work to do in a divided galaxy, with people on both and any and all sides of the matter for any and all reasons. And from what we've seen of Episode VII, it looks like that's an important fact to remember going into the new movie. But if that was all these 370 pages were here for, well, I feel like something was missing. The book wasn't terrible (I didn't hate it like some people seem to), but it just didn't deliver all that I wanted or was expecting it to.