The Lords of the Sith Have Taken Over

Once again, I enjoyed Lords of the Sith by Paul S. Kemp more than either A New Dawn or Tarkin. Maybe I'm just getting into the zone of Star Wars books, or maybe it's because I'm reading hardcovers instead of paperbacks now and that is unbelievably nicer. (It isn't that I mind paperbacks in general--quite the opposite--it's just that the cheap, mass market paperbacks are rather annoying to read.) 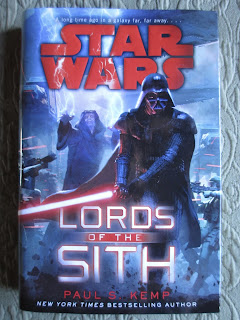 So. Lords of the Sith. A book about Darth Vader and the Emperor that also has a great deal of focus on the rebel group on Ryloth (I am so glad I finished watching The Clone Wars before reading this book). The story of the rebels is interesting: they're well-developed characters that, as a reader, you want to see succeed. And yet there is also that theme in there of what is good and what is not good and why. Early on, Cham reminds himself that they are freedom fighters, not terrorists, and as you continue reading, you realize how much easier it would be for them to win if they were straight out terrorists--and yet if they won that way, their victory would not be worth the defeat of the Empire because they would be exactly the same thing as the Empire. It's similar to the problem the Jedi face when fighting the Clone Wars, trying to hold to their values while also trying to win a war, which is of its nature already against their values. So that's interesting.

But I wanted to see a little more of Vader for a book that's called Lords of the Sith, not Ryloth Rebels. I wanted to see more because the scenes with Vader and the Emperor were really good. Sometimes I wonder what was going on in Vader's head for those twenty some years before Luke convinced him to abandon the dark side. Does he ever think of his life before? How does he justify all the things he does? How is it that he turns away from the dark in the end but never before that final moment in his life? How did he stay under the Emperor's rule for so long? Those questions are what the Vader passages in this book are about.

You get to see a little more of how Vader and the Emperor interact and why Vader obeys him. What I wasn't exactly expecting was the implication that Vader will one day try to defeat the Emperor--because that's what all Sith apprentices do. Here's why that interests me: it's one inevitable action that is expected to be done in one way (so that Vader can take the Emperor's place) but ends up being done in another way (Vader defeats the Emperor simply to take him out of power, even while knowing that doing so will be his end, too, and not caring because it is his chance to make amends for all the terrible things that he has done alongside the Emperor). So all the character moments, where Vader gets faint reminders of his past, or where there were references to what will become future events were what made this book good.

It's also an action book. A lot of shooting, in space and on land, between ships and people and animals. (I've realized, by the way, that I vastly prefer the scenes that take place on land versus in space--maybe that's also why I had less interest in A New Dawn and Tarkin since they had a lot of space time. This one was maybe half and half?). So if you like all the excitement, there you go. For me, I found this kind of a sad book to move through: it shows how much the rebellion had to go through not to defeat the Empire but just to try and hold out against it. You don't want to see them defeated but it is a book about Vader so you know Vader has to win in the end--and you sort of want to see how he does it (because, you know, Vader's cool even if he is evil), but you regret that he has to win. Ah, the tragedy of Vader didn't affect only his family--it affected the whole galaxy.