Quite the dapper-looking gent is this Chocolate Skeleton from the shelves of World Market and made by Salvatore Constantino Chocolates out of Fresno, California. Just in time for Halloween, I would say this is my style of Halloween, too: it's a skeleton, but he looks friendly and fancy, not scary or grotesque. 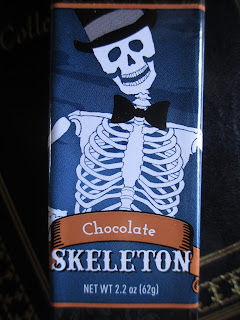 The chocolate is molded decently but could be a little neater considering that the shape of this chocolate is what makes it itself. Some of the edges are a little sloppy, there are just a couple more air bubbles than I like to see, and the finish doesn't look quite right in certain spots. You know, given that the shape/mold is what matters most. 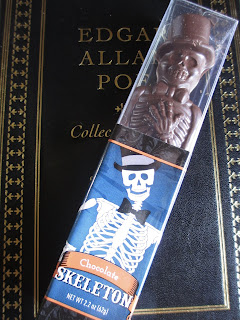 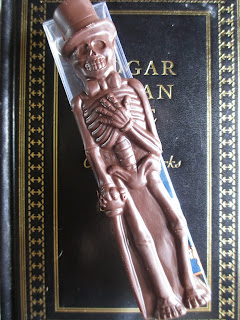 Whether or not you like this blend will be as subjective (or perhaps more) as usual. As for me, I find it still a little too sweet and yet flat in flavor and the texture a little too . . . fluid. I can nibble on this chocolate as a confection, but I don't like it overly much. If, however, you like Godiva's standard dark chocolates or like chocolate in a more general and less specific sense, I think you may quite like this chocolate. 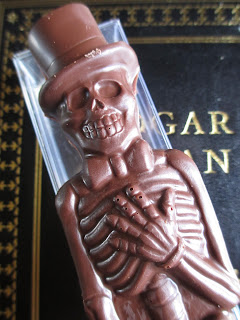 As far as the design goes, though, I love it. Look at how elegant that skeleton is with his cane and top hat. I do love characters with canes. Why do you suppose he has his hand at his chest? If he is the gallant gentleman, I suppose he is making a gesture of greeting, perhaps bowing slightly at the same time. Or maybe he's clutching at his chest because he ate too many chocolate candies in life and that's what caused his heart to fail and send him to his skeletal state?

No, no, I say he's just being friendly. In fact, I wish there were a way that you could see more of the skeleton when he's in his packaging: he'd be great for putting around in Halloween displays. As is, I suppose you can get him out of the clear box on Halloween itself and set him around a dessert display. Or maybe a few of these lined up around a cake or something, as if they're about to dance a jig. (Hey, that's why his hand's out: he's dancing.) Whatever nonsense I said about how these skeletons were molded, they do nonetheless look great when they're up and out.