Sorry that I've gone a week already without posting, and sorry that this is another Star Wars post without anything in between; I'll try and get back into the regular routine after this.

Even though Claudia Gray's Lost Stars was marketed less heavily than Aftermath was, the former did what I wanted the latter to do--and was disappointed that it didn't do. And that's the single direct comparison I'll make between the two.

This book made sense as being part of the Journey to the Force Awakens, though that might seem odd because it in fact covers much of the same space as the original trilogy. Once again, I knew little about this book coming in, just that it was a young reader book and was supposed to be a Romeo and Juliet type story. 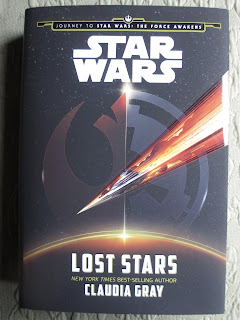 I don't know what young reader means, if that's middle grade or more teen. The prologue feels middle grade, then the first maybe hundred pages are fairly teen/YA. After that, I'd throw out the young reader label completely; I don't get it. What is interesting is the way that the book shifts along with the age of the characters; this not only allows you as the reader to see age development but also the development of ideas and perspectives.

What this book offers is a look at people, just people who are living in the events we're all so familiar with. It isn't a story about what makes a character into a villain because the characters of primary concern aren't villains. It's a story about what motivates these characters, what makes them choose the choices that they choose, and why they believe in what they do--and how all of that does or does not change over time.

Because it covers ground all the way from eight years after the beginning of the Empire to about a year after it's fall, there is a lot that this book goes over and there are a lot of skips over periods of time, whether months or years. But the pacing all felt right and so did the focus: we're already familiar with the Battle of Yavin, with Hoth, and with the second Death Star, so we don't need to have too much focus on basic details. It's enough just to know what these new characters think of events and where they were during these events. Never did this book feel like we were just getting a repeat of Episodes IV-VI; the difference in perspective means that what is important at different moments is entirely different. What matters to Ciena and to Thane isn't always the same as what mattered to Leia or Luke or Darth Vader or anyone else we've previously been familiar with.

Ciena and Thane begin as bright children with dreams, then they develop into young adults trying to make those dreams a reality, and then they become people who are more aware of themselves and of other people. Duty, honor, community, justice, humanity, friendship, loyalty, and of course love are all concepts that they try and define and then act on. And in a time of war, well, it's all a mess.

The only thing I found missing was just one more image of what happens toward the end (I mean, the end before that final, sneak peek-type scene). It almost ended like a book in a series--but as far as I know this is a stand-alone book. It could be possible, though, that pieces of this story (other than that final scene) will make it into other books or movies in some form. I hope so because I just want a little bit more closure.

Other than that, this was a good read and I'm surprised that it wasn't marketed that highly (at least not that I saw). Even though it's a break from all the vital events (Anakin turning dark and then Darth Vader leaving behind the dark), the themes are just as important, if not so elevated: they're the themes of two people trying to find their way in the world--despite the world.

Posted by Deanna Skaggs at 3:25 PM