Who Is the Dark Disciple?

Okay, now I'm getting a sense of what I like best and least in the Star Wars books--that'll help for eventually down the line when I'm ready to start reading some of the non-canon books and want to know which ones I might be interested in.

Dark Disciple by Christie Golden has a lot of what I like--I really enjoyed reading it. 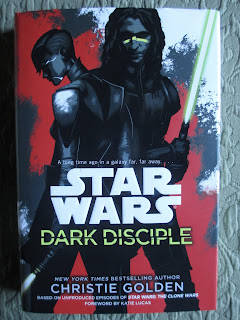 As the line on the front cover, it's based on unproduced episodes of The Clone Wars, making me glad that I finally finished watching the show before starting this book. Now, when I finished the show, I had been expecting something more on Ventress, so the story that's told in this book is exactly what we needed. Ventress still had one more story to tell. Though, in fact, Ventress is only part of this novel; the other half is Vos. I know that he appeared in The Clone Wars, but I won't lie and pretend that I remember him from there.

All the same, he become like a real person in my head. Ventress, too, I began to have more of a connection toward than I'd had while watching her in the animated series. And that's what worked so well in this book: it's character-driven. Well-developed characters that you want to hear more about and whose growth and trials become so important to you. You quickly see where part of the plot is going and after that you know that there are only a couple of options for how it ends (I mean, we all know that it's Anakin who kills Count Dooku), but none of that matters: the important things that you want to see unfold aren't exactly the basic plot elements--they're the subtle (or less subtle) progressions in character.

And that is also what I love best in Star Wars in general. I like to watch Luke discover how, with simple actions, he can rid the galaxy of its tyrants. How Anakin lets a little fear turn into an enormous rage that he lets consume him--until his son is able to bring him back and remind him of the man he once was. Dark Disciple has many of the character themes that we're already familiar with; in fact, the story is quite similar (though with key differences) to Anakin and Padme's. That doesn't mean that it feels repetitive; it just means that it feels familiar, like something I like from this universe.

I love the twist in the title: since Ventress is the baddie, I'd assumed the dark disciple was her. In reality, though, the location of the darkness is more complicated--and Ventress isn't a disciple this time.

The tone is very much in line with The Clone Wars. In the brief moments when Anakin or Obi-Wan showed up, I found myself hearing the voices of the actors from the animated series instead of from the movies (or maybe it's because I just spent so much time watching The Clone Wars). That dash of humor is in there, as is the familiarity with certain planets and peoples that don't really show up in the movies but do in the animated series. Oh, yes, and there is Ventress.

Ah, Ventress, I didn't care much for her when she first turned up in the show but now I have such affection for her character. And Vos, too. I think they're both still alive inside my head: while I was reading, I would fall asleep thinking of the two of them and I think the tone of the book somehow colored my dreams. Their story, to me, goes down with the great Star Wars plots.