When you make a company, you have to put some serious thought into the name. And then some more thought. And then some more. Because I keep feeling disappointed that I like the current chocolate in question but would feel weird talking about the company to someone. "Nibble makes great chocolate." Nibble? That sounds like the name of a baby bear in a children's story. 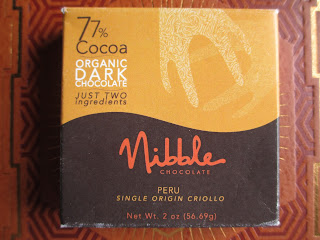 But that doesn't exactly seem to be the case here. Though it's all tastefully placed, the card box is filled with little details about the chocolate. It's 77% cocoa, made with just organic cane sugar and organic Criollo beans grown in Peru; the chocolate is all made in small batches, and the flavor notes are "Caramel, smokey, nuts, biscuit, dried fruit with underlying malt notes." The company, by the way, is based out of San Diego; I bought this and one other Nibble bar at Rust General Store in the Historic Downton District (I'll review that one next time and then I'll be done with my San Diego chocolate finds).

So what do you think? Nibble gives a lot of focus to the refined chocolate tasting style by listing the kind of cocoa, how it was made, and what the flavor notes are. So can you do all that and still be a casual company? Or was the name Nibble not intended to mean that the company offers a casual chocolate experience, anyway? Because then there's this: 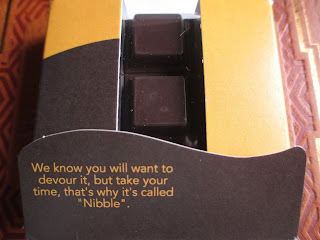 When you open up the card box, it folds out around the chocolate bar. And there is a little note on the flap about taking your time to "nibble" the chocolate instead of eating it quickly. Now, you all know that I eat chocolate slowly (often slow enough that most of it goes into flourless chocolate cakes and brownies instead of directly into my mouth). But I don't really like to be told how to eat my chocolate--not by the packaging, anyway. If I'm reading an article on chocolate tasting, that's fine--but a note snuck into a flap on the box just strikes me as kind of weird. And I wouldn't consider a casual chocolate company to have such a note. So I would therefore not call Nibble a casual chocolate company--so I have concluded that I don't like the company's name. 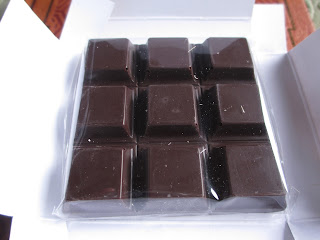 But I've probably spent way too much time on the matter. Because the fact remains that this is good bar of chocolate. It's quite gorgeous to look upon, one square divided into nine smaller squares, dark and shiny. And it smells divine. I only wonder why a company that wants you to "nibble" their chocolate would make such thick, fat squares; I prefer smaller squares that I can set in my mouth to slowly melt. But I guess fatter squares are easier to gnaw on, if you want to gnaw on your chocolate. I settled for dividing each square into two bites. 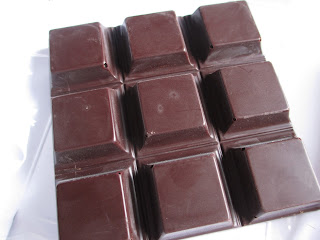 It tastes first dark with red and rich flavors. Then the sugar comes in to add some sweetness, making it taste like a more refined version of Abuelita hot chocolate (when you just eat the chocolate pieces instead of melting them in milk); it's that chocolate and sugar pairing that made me think of the comparison. It develops into a more silvery tone and ends with some tenderness edged in bitterness and a sprinkle of sugar. Sometimes the chocolate gets a tad grainy in texture, but that's much better than being a tad plasticy. To me, there is something organic about the way the cocoa and the sugar come together in this bar and the way that the richness and the sweetness play off of each other.

I'm always happy to find another quality organic, bean to bar chocolate because it is all too true that the mere fact of being organic and bean to bar does not mean that the chocolate will taste great. This one passes the taste test. My other bar from Nibble is in the 80% range, so I'm looking forward to seeing how they handle the darker side (especially since chocolate in the 80's is often my favorite).

Posted by Deanna Skaggs at 4:34 PM