I thought it was time that I shared some pictures of a few of the dinosaurs I spend so much time around* over at Pangaea: Land of the Dinosaurs. Let's start with the king, shall we?

This is the Tyrannosaurus Rex, the King of the Tyrant Lizards. Quite cocky of a name, isn't it? I mean, when he was first discovered, no one had seen anything like this--he was truly terrifying and immediately made a place for himself in our collective imaginations. Though we've since found bigger and fiercer dinosaurs, the T-Rex will never lose his place as king. 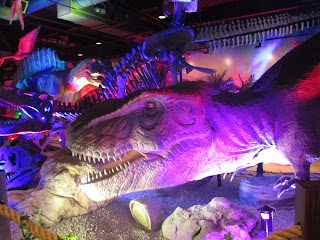 Speaking of dinosaurs bigger than the T-Rex. Do you know my friend the Spinosaurus? He became my favorite after watching Primeval; I love how Connor and Abby come across the Spinosaurus when they're in the Cretaceous. And the Spinosaurus is like a big crocodile with a sail on its back, this hulking amphibious being. It's just beautiful. Also, the first fossil was found in Egypt--which is even better. Imagine this creature waltzing around the Nile or around the pyramids (whether or not the Spinosaurus and the pyramids existed simultaneously is irrelevant). 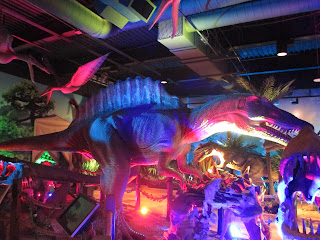 And here's the itsy bitsy Spinosaurus, for the cute effect. (Granted, you can't really see size in pictures; these all look much better in person. And they all move so much.) 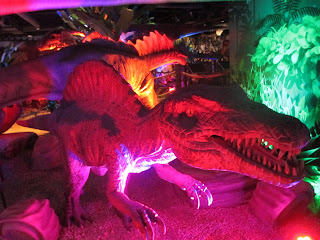 The velociraptors (for which I am sure you were waiting) in particular are difficult to photograph. They claw at the air and they growl and they shake their heads in ferocity. Look at those claws. I'm picturing the size of an emu's claws (or are those called toenails on an emu?) with the attitude of a cat savoring the murder of some type of creature it has just caught (a lizard or a locust or a bird or something). Vicious velociraptors. 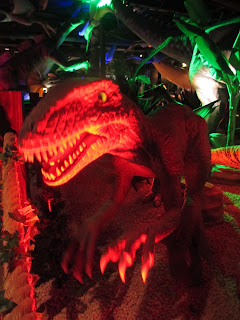 Look at those eyes. And they blink at you, bright spots of light with slivers like the eye of a hawk . . . or the Eye of Sauron. 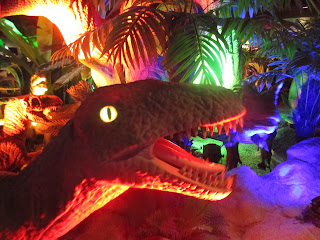 And while you were distracted by the velociraptors, did you even notice the Carnotaurus coming up from behind the trees? This is the Flesh-Eating Bull. He may be smaller than the T-Rex but that's irrelevant: he's still much bigger than we are. And his speed? Thirty miles per hour--let's see if you can outrun that. 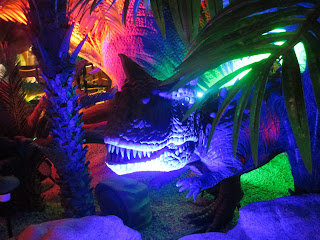 To give you a brief respite from your fear, here is an herbivore. The Stegosaurus, who is the Roofed Lizard because he carries all of those shingles on his back. A walking house he is. Initially, in fact, his discoverer believed that the plates had been flat on the critter's back (like with a turtle); now that would have been much more like a house with a roof than the current look, in which the shingles stick up more like spines. 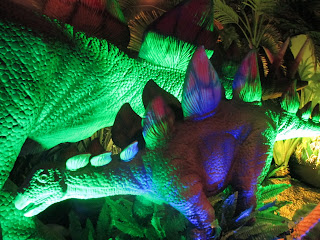 Okay, enough of the herbivores. Here, lurking in the shadows, is the Allosaurus. Many, many of these have been found, quite a few of them in Utah. Picture this great predator stalking the landscape of Monument Valley. 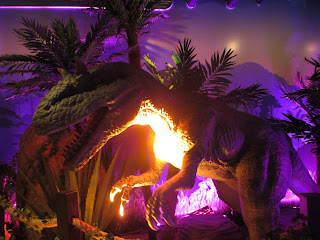 And last we have not a dinosaur but a flying reptile. Remember, the flyers and the swimmers weren't dinosaurs. And the flyers weren't pterodactyls; that's just a common speech name. Technically, only Pterodactylus genus can be called pterodactyls--and there were plenty of other kinds. Just think of how many different kinds of birds, for instance, we have today. You can't call them all hawks because, cool as they are, pigeons just aren't hawks. 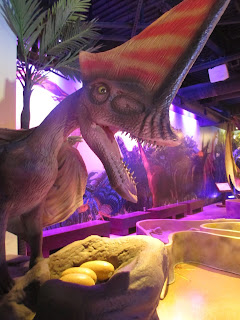 And on that random analogy, we have come to the end here. Just a little quick glimpse at a few of these critters. If you're in Scottsdale (or, you know, Arizona) and you have the desire to spend some time around some dinosaurs (and who doesn't want to spend time around dinosaurs?), this is the place.


*At this point, perhaps you'd like me to add the disclaimer that if you hadn't realized already, yes, I do work for this company in one form or another. But would I be blogging about it if I didn't genuinely like the place?
Posted by Deanna Skaggs at 6:31 PM

Labels: dinosaurs, Land of the Dinosaurs, Odysea, Odysea in the Desert, Pangaea