Despite the cayenne (and my usual disinterest in spicy chocolate), immediately this bar caught my eye at World Market as something unique. Look at that earthy tone of the pencil drawing, highlighted with just a muted touch of color. The hand drawn effect implies that the style of this chocolate will be based on traditional food rather than experimental flavor combinations--or rather than trends that are just exciting because they're trendy rather than because they're wonderful. And La Naya Chocolate is based out of Lithuania, which is not a country I come across too often in, well, any context but especially not in terms of chocolate. So that's exciting. There are organic and handmade labels--I'm not entirely certain what "handmade" means but I guess that's okay. 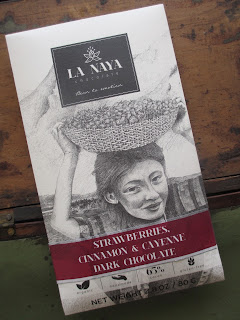 The chocolate is named for the valley of La Naya, which appears to be in Guatemala. There are some poetic descriptions on the back of the card box about the valley and about the tone that it inspired for the company. Here's this: "Lonely moments should not be terrifying. They should be liberating." So, you know, taking moments to observe and take in and savor the world around you. Definitely perfect for setting the scene for chocolate (I used to so often draw nature pictures in my chocolate reviews--I don't seem to do that much anymore, do I?).

At $5 for 80 grams, this bar came in at an average price. The chocolate comes in a pretty design, more modern than what I'd expected given that earthy style of the outside. Then again, though, the angular shapes can also represent mountains, which are a nature element. All of those angles don't photograph well, but they do look cool. 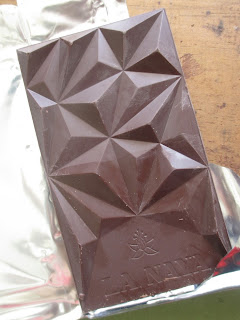 Though a scent of strawberries and chocolate comes from the chocolate, there are no visible strawberry pieces or anything like that. Given that this is a flavored chocolate, I decided that chewing slightly would be the best way to go rather than just letting it melt. Early on, the flavor is of cinnamon and cayenne commingled. Then I picked up that specific chocolate taste that belongs to the Mexican hot chocolates like Abuelita and Ibarra--it's something about the way that the chocolate and sugar combine, or possibly about the type of sugar or maybe even the type of chocolate. If you're familiar with these hot chocolate discs, then you'll know the flavor I mean. 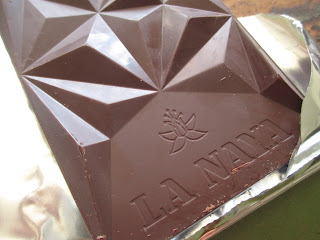 While this chocolate is only lightly dark, neither is it exactly what I would call sweet dark chocolate, either. It's at a good, grounded level somewhere between it all, somewhere in its own space. Now, I don't know that I taste much of the strawberries--but there is a sense of sweetness to the mix (separate from the chocolate element) that I imagine would probably disappear if the strawberries were suddenly taken away. The strawberries, by the way, are freeze dried. If you're not a fan of the almost crispy texture of freeze dried strawberries in chocolate, don't worry: it's just chocolate texture all the way through here.

Back to the spice. It isn't too much. Instead of being spicy chocolate, this is flavored chocolate. Sure, there is a light spiciness that you'll notice more if you're sensitive to spiciness. But a good percentage of people won't find this chocolate spicy at all--which I count as a positive. Again, the cinnamon and cayenne are commingled, which helps to build up that sense of flavors rather than reactions (that is, burning). That commingling is what makes this flavor mix work.

So, yes, it does remind me of something kind of traditional, of that sense of older flavor profiles. I feel like this chocolate is based on an old recipe for drinking chocolate. That is, it doesn't have to be that; it's just that it gives me that sense of the historical, the traditional, and the natural. As far as putting together good flavored chocolate, La Naya has satisfied me so far.

Posted by Deanna Skaggs at 8:23 PM