Aside from the fact that The Firebird was a premiere, Ballet Arizona had me at the mention of La Sylphide. A story about a man falling in love with a nymph and pictures suggesting that they'll be dancing around the woods? Count me in. 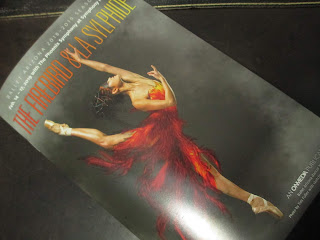 The latter played first and was the longer of the two pieces. It was lovely, reminiscent of Sleeping Beauty that I adore, except that this was new to me. Everything created that concept of magical love, love that sweeps James off his feet, not necessarily for the better. I do wish, though, that for the sylph's costume they chose something a little more nymph-like than ballerina-like. She was pretty and played that entrancing beauty, but I wanted a touch more fantasy and a touch more of a feeling of the woods in her look. Still, I could have gone to watch just this piece and been happy.

And then came The Firebird. Here I don't understand the main promotional image. I don't understand the name. Unless I slept through that part (not to say that I was sleeping; I wasn't), I didn't see any birds of fire. Anyways. The Firebird was a sci-fi fantasy ballet. Even as someone who has only really seen a few ballets, seeing something different was welcome. They made use of the giant screen to create a moving backdrop of space and the costumes were shiny and sharp instead of soft and pretty. So definitely a strong visual tone.

I had mixed feelings about the first scene. The choreography was pretty (and here I am using the word) and yet I didn't entirely understand it within the context of the plot. There was that sensual element to it and yet this part wasn't the love story and it was one woman with a group of men . . . so I'm not entirely sure how I feel about it all. Maybe it's just a case of the plot not coming through visually without reading it in the program (which, quite frankly, I always think it's easiest to read the program).

That first scene felt more sci-fi, while the second scene brought in more of that high fantasy feel. While I'm running dry on specific comments, overall it was a beautiful and visually different piece. When the Prince and the Princess had their scenes together, they did portray that falling in love concept (of course love was the theme in both pieces since this show was right around Valentine's Day). Something about it felt heavily conceptual, if that's the right word. This was why the plot didn't always necessarily come across just from watching. It fits, though, for both a visual (as in non-verbal) piece and for a fantasy piece.

Since I do like both fantasy and sci-fi, I enjoyed The Firebird. I'd see it again given the opportunity. It remains possible, though, that apart from the novelty of The Firebird, I may have liked La Sulphide more. It's the woods thing, probably: I have a weakness for love stories in the woods.

Posted by Deanna Skaggs at 8:20 PM