In an experiment, this will be possibly the start of a new chocolate series, the two perspective chocolate review. I'd intended to start with a chocolate I had gone over before, but it would seem that I never in fact wrote up a review on Taza's Cinnamon, even back on Chocablog. But I have talked about Taza, Taza the brand of stone ground chocolate. So I'll just go with that background since this really isn't going to be a regular chocolate review.

While, to me, cinnamon and chocolate are a natural combination, and especially natural for Taza, to my fellow taster it was a new combination, hitherto only tried a couple of weeks ago in the seasonal Cinnamon Milano cookies. Stone ground chocolate was also new, as in fact was, well, most of the type of chocolate that I go over. So we went in with someone who was very familiar with the product and someone to whom it was completely new. 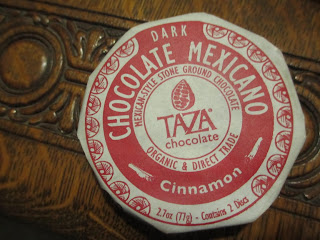 While the grainy texture of Taza greeted me with its crumbly, sugar graininess, he said it reminded him of grains of sand at the beach. Not quite how I had thought of stone ground chocolate before, though the difference is strong from the smoothness of the usual, more processed chocolate. 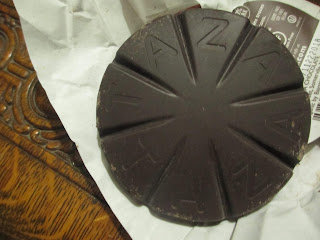 All of this talk of chocolate texture launched an explanation from me (involving the cocoa pod brought over from a shelf in my office) about how chocolate grows from a tree and it's a seed called a bean that comes inside of a white pulp in the pod and that's dried and ground up, etc. and has sugar added to it. This tangent created a new identity for the beautiful cocoa pod: he named it a piece from a sci-fi horror movie, saying that it looked like something an alien would jump out of. It is called a pod, after all, right?

Back, however, to the chocolate bar. What we did both agree on was that there wasn't much cinnamon flavor. Possibly this might be because the chocolate was getting a little old; maybe the cinnamon had faded. It's been long enough since I had Taza's Cinnamon that I don't remember if the cinnamon flavor is usually stronger. Flavor aside, though, Taza is unique enough for most of us that it's always worth a try if you've never had their chocolate before. It can definitely be a conversation piece.