Some chocolate companies have an intense marketing/design team behind them. Antidote Chocolate appears to be one of those companies. Maybe it's largely due to the vision of founder Red Thalhammer; maybe it's because she knows how to build a good team. But Antidote is oozing with that cool and hip vibe. You can see it in the design. You can see it in the words on the packaging and on their website. There are references to the Greek goddess of youth, Hebe, and to chocolate as an antidote to whatever is troubling you (stress, hunger, sadness, low energy, etc.). And of course there is the obligatory talk about the Ecuadorian Arriba Nacional cocoa and about how it's all direct trade. 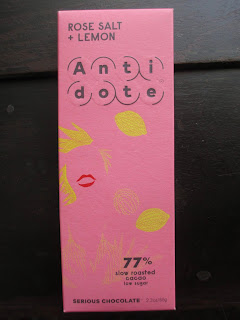 When things are marketed so "well" and on trend you almost begin to wonder if it's too much. Trends change, after all. But style is just style, and flavor remains apart from all that (or does it? what do the blind taste tests show?). 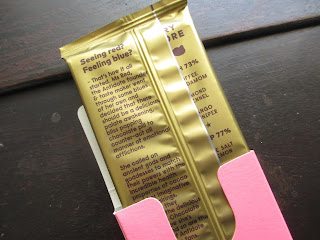 Sadly, I once again have some chocolate with very bad bloom on it. And this isn't due to an impending expiration date: that isn't until a year from now. That's Arizona, I guess. This is why there used to be no chocolate makers in Arizona, eh? It's winter right now, so this damage must have taken place a while ago. I wonder if it happened when it was being shipped to the little shop where I bought it, and then it's been sitting in that little shop with no one buying it for months since that time . . . 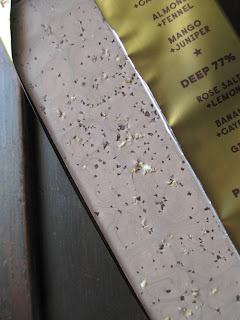 Anyway. This naturally would have been quite an attractive bar before the bloom. The back of the bar has a look almost like chocolate bark, with the salt and lemon peel sprinkled onto it. The front has round bumps on the squares that spell out "Antidote." These are the chocolate pills you can pop as the antidote to whatever ails you. Personal preference here: it's nice to consider good quality chocolate as something you can turn to when you need a little something special, but do we really want to make light of the concept of pill-popping? 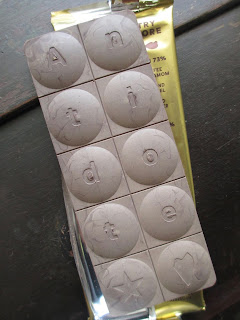 The chocolate has a straightforward, Ghirardelli type semisweet chocolate aroma. I tasted it first with the salt side down. The salt almost tasted smokey for a second, but no, that wasn't it at all, it was just salt. The chocolate unfortunately didn't want to melt. A combination of this being winter and therefore the chocolate being currently at a cooler temperature and also the damage done by the blooming. So I went ahead and chewed the chocolate a little; I didn't want to sit with it an hour until it became warm enough to melt. 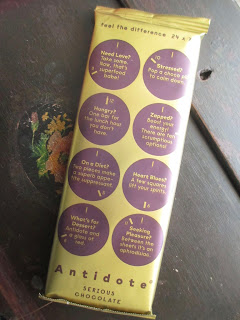 In this fashion, I did get a slight bitterness early on. I think that was mainly because I got a full hit of the chocolate instead of easing into it: this chocolate really isn't what I'd normally call bitter. It's warm and red and nice. The salt was gone by the time I got to the chocolate and I didn't notice any rose or lemon flavors. The chocolate's flavor stayed pretty much the same the whole time, which isn't necessarily a bad thing; it's just the way it is.

Going with the salt side up for the second piece, I started on a little chewing again, then tried to keep up a light chew rather than settling in for melting. This way the salt was able to mix in with the flavor of the chocolate more. This time, the feeling was more of a chocolate spread, which was kind of a cool effect. This happened both because of the way that the salt worked in and because of the texture. There's something about this chocolate's texture that feels different, a little thicker. I can't say grainy, just thicker somehow.

By this point, I was really wondering about the missing rose and lemon. So I turned to the ingredients list and finally realized that rose and salt are not two separate words: it is fact rose salt. I've come across plenty of flavored salts, but never rose salt. It doesn't seem to make sense: isn't rose too tender to stand up to the bold taste of salt? No wonder I don't taste any rose. I tried licking the salt on the bar to see if I could taste it in a more isolated way like that, but I still just tasted salt. Granted, the salt did taste a little different to me on that first bite, but that doesn't mean that I ever tasted rose.

Now, not being one to favor lemon chocolate, I wasn't exactly looking forward to the lemon element, but still, where is it? I did end up with a tiny piece of lemon peel in my mouth at one point, so I could taste it then when it was by itself like that. But that's different. And it did make me see why the lemon is nigh invisible: the lemon peel pieces are pretty tiny. Going subtle on lemon is probably a good thing, but maybe if the pieces were just a little bigger, they'd be part of the flavor instead of just images on the packaging.

So this is mainly just salted chocolate. I mean, it's possible that because this chocolate has been through some temperature changes or whatnot, that affected the flavors. But I doubt it affected things that much. As salted chocolate, it's nice. It's a good level of salt. Not overly salty and yet not super subtle either. Given that Antidote focuses on flavored chocolate, I would have preferred my first look at their products to be something with a little more flavor going on, something a little bolder maybe. But this was good. It's a solid, widely-appealing dark chocolate base with some fun flavor added in.

Posted by Deanna Skaggs at 6:04 PM