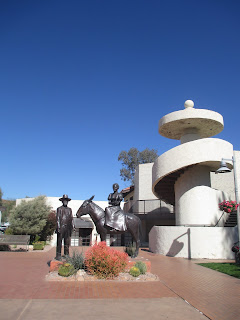 The day begins with the Parada itself. Not really being overly a parade person, I took my time getting in and only caught about the second half (maybe less) or the parade. It's a community parade, with local schools, organizations, some knights in armor, and plenty of horses. Families are going to go to see their kids in the parade and so that their other children can have fun and get candy. If you love horses, there are some absolutely beautiful horses. And people in general are going to go because it's just a celebration of Scottsdale and central Arizona--and that's great. 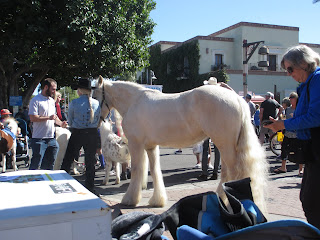 There were horses wandering around afterwards, too.

After the parade, you have the rest of the day to enjoy the Trail's End Festival and the Arizona Indian Festival. Though they're all pretty much the same thing for the casual attendee, there is a division between them. The Trail's End Festival takes place in the street (which is of course closed off for the day) and the Arizona Indian Festival is off to the side in the Civic Center Plaza. After glancing at the food options available in the main area (these are the things that are important to me), I headed to the Plaza area first. 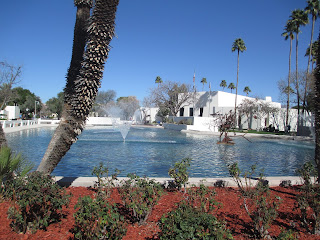 This park-like area is a wonderful, quiet place to spend time even when there isn't a festival. And during the festival, if you walked just a little apart, it also gave a chance for a quieter atmosphere for anyone needing a break from all the noise and people. The Indian Festival had vendors selling art and jewelry--a great opportunity if you're in the market for those. Of course there was fry bread for sale. There were kids' activities and cultural demonstrations. Various tribes also had booths to share their culture, and plenty of spots were giving info on tourist sites and tours, that sort of thing. Which is quite nice: there are many beautiful places to visit that are on tribal land, where there are separate rules about how to do things. So it's nice that they have people there who can answer questions or let you know what you might need to visit some of these places (whether a specific spot needs a permit and how to get one of if you can only go on a guided tour, that sort of thing). 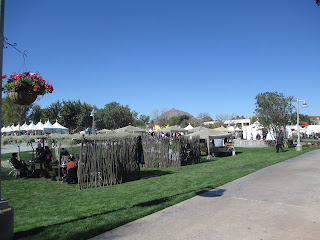 Back in the Trail's End zone, there were more kids' activities. Plenty of them free, so this really is a great family event. There were three stages, as well. Two with bands, the style of music you'd expect at a community event, and then the Fiesta Stage had Mexican music and dancing. 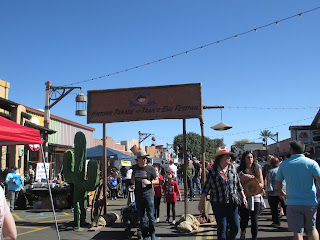 I admit that I did skip out on the historical reenacting group. I'm not into focusing on gunfights and prostitutes--the nineteenth century and the history of the West and of Arizona are much more than that. So that's media, not history. What about the settlers and the ranchers--or hey, what about what all the rest of the festival is about? It kind of clashed to me. 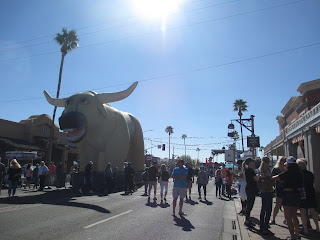 Now back to the food. I wanted to scout it all out before I decided on anything because the one thing I was allowing myself to spend money on was food. (I had expected there to be more vendors than there were, so I had already beaten it into my head to not get overwhelmed by all the nice jewelry or whatever caught my eye.) They had some of the fair food type things and burgers and the fry bread. But I was trying to decide between tacos from this truck or that truck--so I got some from both. And they were both very good--and I don't say things like that lightly. So A+ on the food. 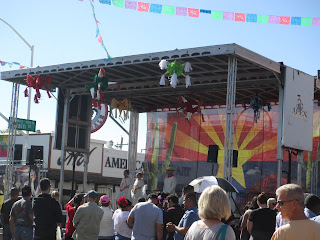 I sat for a while enjoying the sun after I'd eaten and watching the dancing. My favorite things were the food and the horses--and you know what, also the sun. It was an almost hot day for being winter, the type of day where you're glad for an excuse to just get outside.
Posted by Deanna Skaggs at 11:33 AM