At the McDowell Sonoran Preserve, the Gateway Loop Trail will take you on a four and a half mile, moderately difficult circle around the nearest peak. The rocks are great; the saguaros are great; the teddy bear chollas are great; the ocotillo are great. And so are the fresh air and exercise. But you know the thing about simple trails? Sometimes they have secrets hidden in plain sight. 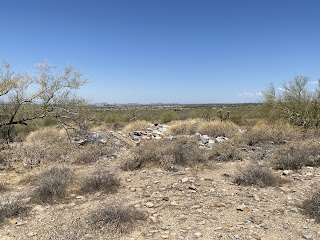 You won't find it on the trail maps, but Google Maps shows a little spot marked Old Mission Fort just off of the main trail. If you turned left to get onto the loop trail, then you can turn left at the second to last turnoff--that is, the Crossover Trail. If you turned right, then it'll be a right turn at the second turnoff. Turn the corner from the Crossover Trail and there you will find the light ruins of a near-forgotten building. 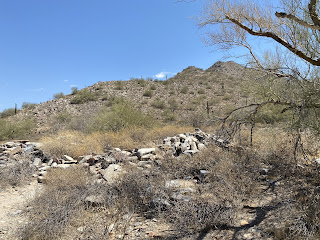 Museums take time and money and commitment. And, well, there also has to be the need and want for a particular museum in a particular spot. So sometimes old buildings get museums. Sometimes they just end up as near-forgotten ruins hidden in plain sight (or of course also sometimes hidden deeply). You could take the main loop trail a thousand times and never know this was here. 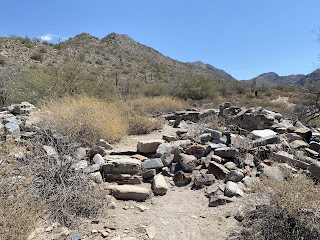 It isn't the most terribly exciting to view. Just some blocks marking a basic foundation and size and shape. But it's enough for the imagination and enough for conversation. Who built it and when? How many times did it change ownership? Who lived here last? What did it look like in its prime? How many other buildings were nearby? 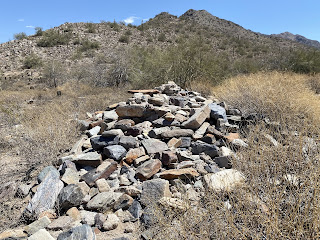 Trying to research the place online doesn't bring up much. As the name suggests, it appears to have at one point been connected to the fort and at one point to have been a mission and also to have been a private residence related to the mine. If anyone knows of any books that reference it, I would certainly be interested. But beyond the specifics of who lived or worked in this building, it's simply nice to have a bit of a reminder of the past. A hundred years or so is such a short time ago, and yet still it sets the mind to thinking. 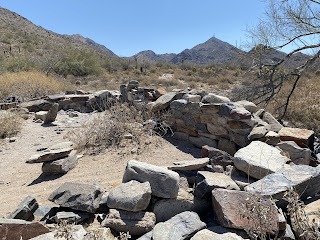 The paths we walk have been walked before by different feet. Some things were much the same and some things were quite different. It's just something to ponder: my life is just one life in a great big history of lives.

(And just a reminder, take nothing but pictures and leave nothing but footprints. And stay on the trail. If preservation doesn't matter to you, at least remember that rattlesnakes are not a myth.)

Posted by Deanna Skaggs at 1:56 PM