Slowly but surely I have been making my way through Zak's Chocolate's dark chocolate bars. Today we have their Dominican Oko Caribe 70%. It came wrapped in one of my favorite of their paper colors, which is of course the green and gold. Surely that is a good sign. The tasting notes of "natural malty cocoa flavor and notes of blueberries" certainly are appealing, as well. While blueberries might not be my favorite thing in the world (though I do at least eat them now), blueberry notes are different and generally quite nice. 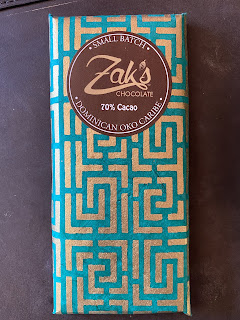 The aroma of this chocolate beneath its golden wrapper is on the sweeter side--that is, it is soft and gentle. It's what I describe as silvery. Following with that tone, the chocolate begins with a semisweet taste. A certain tang develops then that, while a definite flavor, on my own I couldn't name. While not fruity (which I generally take to mean citrusy), it does recall fruits. So a comparison of berries, specifically blueberries, makes sense. The tangy flavor rounds out as you pass the halfway point of the melting. From there, a fudge flavor develops and the tang gives way to classic chocolate. It's an interesting duality as far as a tangy element one moment and simple chocolate another. 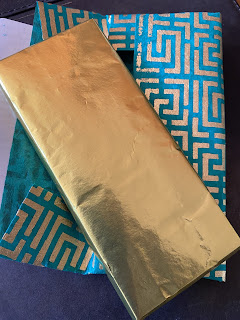 For comparison, the stages of the flavors were slightly different when I tried the chocolate again on another day but only about twenty or thirty minutes earlier in the day (I always try to aim for close to 11 AM but of course there tends to be variation). This time I found the first touch of the chocolate to be slightly bitter, which was a contrast to the gentleness I'd described before. That quickly gave way, though. But I found some of the cocoa flavors came before the tang--and this time I definitely wanted to describe the tang as banana-like. It felt softer and less tangy than before. The fudge flavor still came in to finish off the chocolate, leaving a warm and flavorful mouthfeel after it had melted. This time I had some of the tang left as part of the mouthfeel. 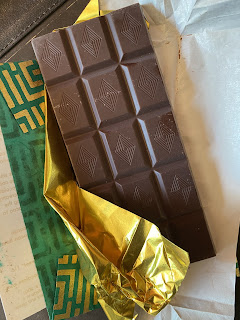 Even with the variation, the gist of the chocolate remained the same. Classic cocoa notes along with a fruity or berry flavor to add interest and pizazz. It makes for a nice compromise between preferences for simple flavor profiles and more complicated flavor notes. You get a touch of both here, which I find quite unique. And both aspects of the chocolate are entirely lovely. This chocolate is neither bitter nor sweet, and the texture of course is well-done as usual with Zak's. So this is another of their dark chocolates that I would suggest appeals to a wide variety of palates and preferences.