Normally I associate malt with cheap, milk chocolate candy or milkshakes. So when I saw Alter Eco's Salt & Malt Dark Chocolate (that is, dark chocolate not milk), naturally I brought it home with me immediately. I'm not sure whether or not it's a new flavor from them; it was just new to me. (Checking out their website to see if they had it labeled as a new product, I did see their new Hazelnut and Almond Butter Bombs--I will certainly be hoping my store gets the hazelnut ones soon. Please and thank you.) 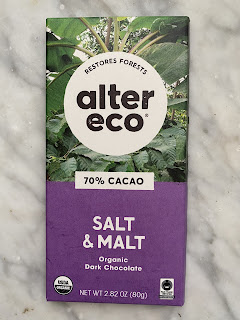 The card box folds out to the usual info about biodiversity for the ecosystem and stability for the cocoa farmers. All good and well. The cocoa industry certainly has its wrongs to right, but it's great how there are companies taking the initiative to not just make not just make "fair trade" chocolate but to make a product that enhances the environment for the land and the people both. Funny how those two go hand in hand, isn't it? 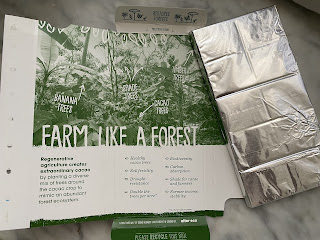 Inside its silver wrapper, the chocolate far is smooth on the front with a bumpy underside. That I wasn't expecting. The look is similar to crisped rice showing beneath the surface. Like I said, when it comes to malt and chocolate, normally I expect candies like Whoppers. I can't think of having ever had malt within a chocolate bar format before, though the difference in form didn't occur to me until I opened the seal (I had just been thinking of the dark chocolate). So if you don't have individual pieces of malt candy covered in chocolate, then I suppose it follows that you would make smaller malty pieces to stick inside of a chocolate bar. 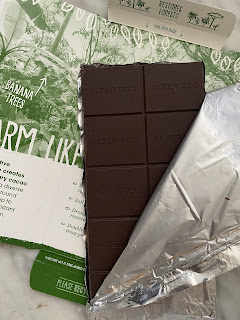 The aroma has an enticing, fudge quality. The flavor, then, is somewhere between semisweet and bittersweet. At 70% cocoa, the chocolate is mild with just a touch of sweetness and a dash of nuance; it's a solid 70% pleaser. Its flavor comes with a pale crunch from the malt crisps and a touch of salt. The malt doesn't really add strongly to the taste; perhaps this is why it's helpful to have the added flavor of the salt to tease the palate. 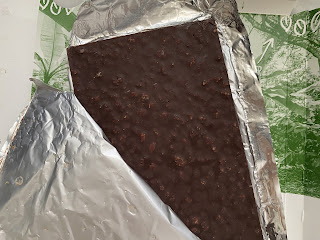 Yet I'm not complaining. The texture of the malt crisps (or crumbs as the ingredients list calls them--they're basically made of flour, malt, and sugar, but that's just a summary) is quite unique. It isn't quite a crispy or crunchy texture. Not at all like crisped rice. The closest comparison might be to Crispy M&Ms--but that's difficult to say because of course the candy shell of M&Ms makes it difficult to zero in on the crispy texture (besides the fact that I don't come across Crispy M&Ms at all often). Anyway. The crunch is very light and delicate, especially because it is in such small pieces as compared with the size of malt balls. 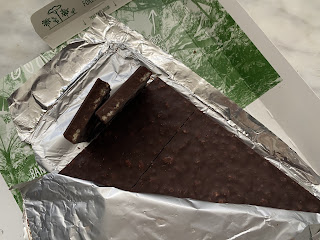 I would have expected something like this to be made with milk chocolate rather than dark. Even that tang from the salt is a reminder not to be too serious and can even put in mind salted peanuts or something like that--something that, again, has more of an association with candy. But again I'm not complaining: it all works so well with the dark chocolate. It's rarer than one might think to come across a good, casual dark chocolate that has both sweetness and nuance while still not being too sweet. While I do enjoy milk chocolate, as well, it's nice to have the option for a good dark chocolate, as well. And of course besides flavor preferences, if anyone prefers or needs to avoid milk, then this is also a good alternative. Primarily, though, it's just a good bar of chocolate. It's unique and yet so smooth and seamless.

Posted by Deanna Skaggs at 8:03 AM